“Stories are not nails to be driven home. They are tapestries to be woven.”

“Sometimes we have to hide from what others see in order to be what we know we are.” 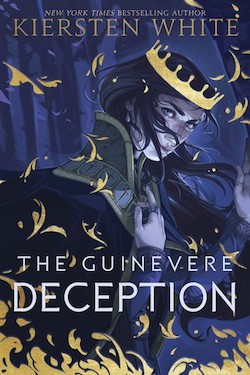 Guinevere comes to Camelot as a stranger–a princess who will marry the young king who has banished magic and his mentor, the wizard Merlin, from his kingdom as he tries to bring order to the chaos threatening to destroy everything he has worked so hard to build.

Except Guinevere died before she ever came to Camelot. No one knows the real identity of the girl who was sent to replace Guinevere–her name is a secret, her past a mystery. All that matters is that Merlin sent her to Camelot to protect Arthur.

Threats abound in Camelot as Guinevere investigates scheming nobles, mysterious new arrivals drawn by the kingdom’s promise, and magic fighting to get past her own rudimentary protections.

Magic is chaos–a natural force always waiting to reclaim what Arthur and Camelot stole away–a fact Guinevere knows better than most. With danger circling and secrets everywhere, Guinevere will have to rely on her own cunning as she decides who to trust and what to fight for in The Guinevere Deception (2019) by Kiersten White.

The Guinevere Deception is the first book in White’s Camelot Rising trilogy.

White brings inventive world building and a feminist lens to her Arthurian retelling that centers a decidedly unique Guinevere. This historical fantasy breathes new life into the familiar source material with layers of intrigue and suspense as Guinevere tries to uncover both the hidden threats to Camelot and the secrets of her own past with Merlin.

The push and pull between the order of newly built Camelot and the chaos of primordial magic that previously ruled drive the plot forward as Guinevere comes closer to understanding Arthur’s greatest threat. This tension is mirrored by Guinevere’s struggle to be the protector she needs to be while also molding herself into the queen Arthur needs to rule beside him.

The Guinevere Deception is a fast-paced adventure filled with intrigue, magic, and the barest hints of romance and enduring friendship as Guinevere begins to make a place for herself in a kingdom she never could have imagined when Merlin plucked her out of the forest. A must reads for fans of Arthurian legend and readers looking for a fantasy with feminism and heroism in equal measure–with just a touch of existential dread to keep things interesting. Highly recommended.

Possible Pairings: The Candle and the Flame by Nafiza Azad, The Star-Touched Queen by Roshani Chokshi, Spindle and Dagger by J. Anderson Coats, Scarlet by A. C. Gaughen, A Curse So Dark and Lonely by Brigid Kemmerer, Forest of Souls by Lori M. Lee, The Outlaws of Sherwood by Robin McKinley, Sweet Black Waves by Kristina Perez, Song of the Sparrow by Lisa Ann Sandell, Strange the Dreamer by Laini Taylor, Realm of Ruins by Hannah West