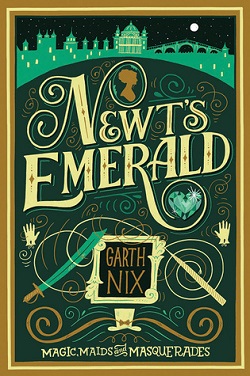 Lady Truthful (Newt to her friends) is enjoying a rather typical eighteenth birthday until the Newington Emerald–a family heirloom and her entire inheritance from her dearly departed mother–disappears.

While the men in her life are keen to solve the problem for her, Truthful has a better idea. Disguised as a man complete with a mustache, Newt sets out to follow the emerald’s trail and recover the stolen artifact.

Aided by the shrewd but unobservant Major Harnett who believes her to be a man, Newt chases clues and dark magic across England in search of the emerald. As she comes closer to her quarry Newt will also have to confront the uncomfortable realization that in aligning herself with Major Harnett she may also have fallen in love with him in Newt’s Emerald (2013) by Garth Nix.

Close third person narration and distinct world building help to add nuance to this comedy of errors as Newt embarks on a madcap journey to retrieve a stolen emerald and, perhaps, understand the machinations of her own heart.

Possible Pairings: The Hummingbird Dagger by Cindy Antsey, Etiquette and Espionage by Gail Carriger, Dangerous Alliance: An Austentacious Romance by Jennieke Cohen, Silver in the Blood by Jessica Day George, The Dark Days Club by Alison Goodman, The Keeper of the Mist by Rachel Neumeier, Leviathan by Scott Westerfeld, Sorcery and Cecelia by Patricia C. Wrede and Caroline Stevermer