“They were all marching toward their own secret fates, and long before the next decade rolled around, each would escape in her own way–one would be famous, one would be married, and one would be dead.” 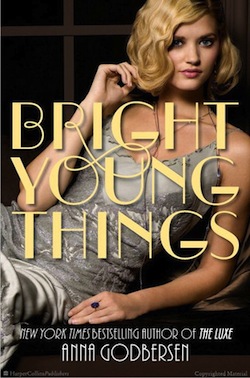 1929: Cordelia Grey and Letty Larkspur are leaving their stifling Ohio town behind to seek fame and fortune in New York City. With a big voice and hopes to match, Letty knows it’s only a matter of time before she hits it big in the biggest city of all. Cordelia is seeking other things–things she can’t even tell her best friend Letty without looking like a fool–even if Cordelia knows her future is in New York.

Along the way to their dreams the girls will face hardships and separation. They’ll meet cads and swells. One of them will even take up with one of New York’s elite flappers–a girl named Astrid Donal.

Everyone comes to New York expecting big things. But Cordelia and Letty will both have to make hard choices to get everything they want while the Jazz Age is still raging in Bright Young Things (2010) by Anna Godbersen.

Bright Young Things is the first book in Godbersen’s 1920s series. It is followed by Beautiful Days and The Lucky Ones. (Godbersen is also the author of the bestselling Luxe series.)

I love historical fiction. Show me a book set anywhere between 1900 and 1940 and there is a 99% chance that I will want to read it. I especially love the 1920s and flappers. (I even wrote a research paper in high school about 1920s fashion. But that’s another story.) My point in sharing all of this? I am pretty well-read when it comes to 1920s–fashion, social mores, history.

What does that have to do with Bright Young Things? It’s part of why I didn’t like it more. I wanted to love this book and I wanted to be excited about the series. But after reading so many other books set in the period the plot and setting started to feel very familiar.

Most of the characters in Bright Young Things are privileged; they have money, they have status, they get what they want. They’re careless like Tom and Daisy Buchanan. And that is great if you want to re-live the frenzy and decadence of The Great Gatsby. But if you want more nuance or something new, well, that isn’t going to be found in Bright Young Things as it treads familiar themes with the decadence of the 1920s, the thrill of speakeasies and the danger of falling for the wrong boy.

My favorite parts of the story were when Letty struck out on her own and found work as a cigarette girl–something I never read about–which was fascinating and ended all too soon. Besides Letty the other characters felt painfully vapid and superficial.

Godbersen lays all of the groundwork for the series with the sprawling prologue and introduction of characters who will be key later in the story. But I never felt excited enough while reading Bright Young Things to feel any urgency in continuing with the series (if I ever will).

This would be a great introductory read for anyone hoping to start reading historical fiction in general or about the 1920s specifically. If you already know about the period and want to move beyond the basics I’d suggest The Diviners by Libba Bray which delves deeper into a variety of areas during the decade albeit in the midst of a supernatural murder investigation.

Possible Pairings: The Diviners by Libba Bray, What I Saw and How I Lied by Judy Blundell, Suite Scarlett by Maureen Johnson, New York City: A Short History by George J. Lankevich, Vixen by Jillian Larkin, Confessions of the Sullivan Sisters by Natalie Standiford, Dust Girl by Sarah Zettel