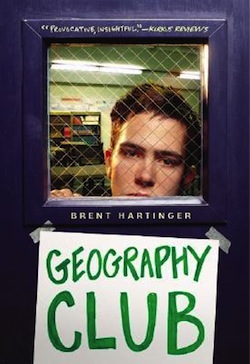 Russel Middlebrook is the only gay kid at Goodkind High School.

In a school so small, in a town so remote, Russel is convinced he’d know if there was anyone else navigating the same minefield of classes and locker rooms and pretending.

At least, he thought he was until a chat room buddy turns out to be not just a fellow student but someone Russel actually knows.

And then he finds another friend who has been secretly dating her girlfriend for years.

And her girlfriend has another friend.

These kids have nothing in common except a desperate need to have someone to talk to–someone who understands. The only problem is that having nothing in common also means they have no reason to get together on a regular basis without attracting attention. It’s not like they could start a club. . . . unless it’s a boring club no one would want to join because it talks about geography at every meeting. Russel and his friends think they have all of their bases covered but things get way more complicated when their boring, unappealing club starts to get a lot of attention in Geography Club (2003) by Brent Hartinger.

Geography Club is a standout book that is celebrating its tenth anniversary and is being adapted into a movie. It is also the first of Hartinger’s books featuring Russel and his friends. (You can see more of them in The Order of the Poison Oak, Split Screen (which is two-stories-in-one) and the latest The Elephant of Surprise which came out this year).

Books about gay protagonists and books featuring support systems like a Gay-Straight Alliance are much more common now, in 2013, than they were when this book was originally published in 2003. However Geography Club more than stands the test of time.

More importantly, Geography Club is just a good story. Russel is a likable, witty narrator and Hartinger imbues his writing with humor and optimism even when Russel winds up in quite a few messes (who knew going on a date with a girl could cause so many problems down the road?).

Geography Club is a quick, thoughtful read in which Russel answers a lot of hard questions and makes quite a few good jokes along the way.

Possible Pairings: Keep Holding On by Susane Colasanti, Skinny by Donna Crooner, Fat Kid Rules the World by K. L. Going, Boy Meets Boy by David Levithan, Drawing the Ocean by Carolyn MacCullough, Sprout by Dale Peck, Rainbow Boys by Alex Sanchez, A Map of the Known World by Lisa Ann Sandell, Freak Show by James St. James, The Inside of Out by Jenn Marie Thorne

You can also read my exclusive interview with Brent Hartinger starting April 2, 2013.

As part of this week’s Brent Hartinger extravaganza, I’m giving away an ARC of Hartinger’s latest title The Elephant of Surprise which features Russel Middlebrook and his friends.

You can also check out my interview with Brent Hartinger and my review of Geography Club here on the blog.

TO ENTER fill out the handy form below: