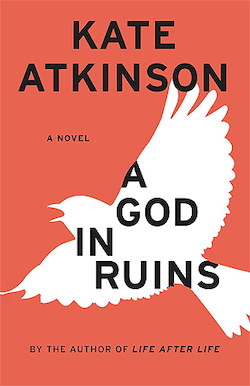 Teddy could have been a poet or a banker. Instead war intervened and he became an RAF bomber pilot. Those years spent bombing German civilians, never knowing if he’d live through his next mission, were the best years of his life–the best moments–even with the violence, the death, and his time as a POW.

But everyone has to return to the ground eventually and when the war ends, Teddy becomes a husband and a father, a journalist, and more. But his hardest role even all those years later will be living in a future he never thought he’d see in A God in Ruins (2015) by Kate Atkinson.

Readers of Atkinson’s previous powerhouse novel Life After Life will recognize protagonist Teddy as Ursula Todd’s favorite brother–a figure she worked across multiple lives to save when he is declared missing in action and presumed dead after a failed bomb run. While both books function separately, it is unlikely readers will catch all of the nuance and subtleties of this novel without reading Life After Life first.

Teddy only has one life so this novel does not explore the same themes of reincarnation although Atkinson uses the same nonlinear structure with multiple points of view to excellent effect.

From here on this review will have some spoilers for the rest of the book, proceed with caution:

If I could forget I ever read A God in Ruins, I would. Even more than Life After Life, this is not an easy book. Teddy’s recollections of war are visceral and bloody. Later, Nancy (Teddy’s wife) is diagnosed with brain cancer and her deterioration is graphically shown and devastating to read.

All of which are things I’m willing to deal with (or perhaps skim) assuming that a novel is working toward a greater purpose. That was not the case here. Even weeks after finishing this book, I don’t know what to make of the last chapter. It was gutting and well-done but also largely invalidated most of the book as Atkinson tells readers that Teddy never was–he did die during the war–but that his story is an avatar for so many others who lost their lives during the conflict. Worse than erasing Teddy and his family who I spent so much time getting to know, this conceit also invalidates a lot of Life After Life by association, a book I had previously loved, as much of what Ursula worked toward in the final act of that book is proven to be for naught.

Atkinson is still, obviously, incredibly talented. On a craft level A God in Ruins is indisputably brilliant. But most of it, not least the ending, has left a bad taste in my mouth and left me wishing Life After Life had remained a standalone untarnished by this disappointing companion.