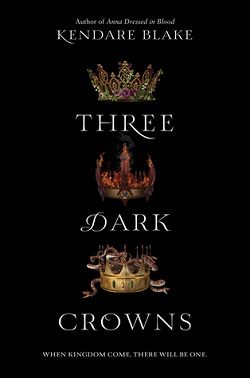 On the island of Fennbirn, a reigning queen gives birth to triplets each generation. Once the triplets are born, the queen’s rule is over and she is exiled with her consort to his homeland. The triplets–all equal heirs to the crown–are separated and raised according to their magic until the year they turn sixteen when the real battle for the throne begins. By the end of the year the crown will go to the last queen left alive.

Katharine has been raised by the poisoners, arguably the most powerful group on the island and the ruling class for generations. But Katharine is weak. Even the simplest poisons wreak havoc on her body– a fact that she and her guardian are determined to keep hidden at any cost.

Mirabella is a powerful elemental with the ability to summon storms and conjure fire. Her power is unprecedented drawing even the supposedly neutral temple priestess to champion her bid for the crown.

Arsinoe has found familial love and friendship in her home among the naturalists. But she has not found her magic. She cannot control animals of any size or make the smallest plants bloom–something any naturalist should be able to accomplish from a young age.

As Katharine, Mirabella, and Arsinoe contemplate their fate they all have their eye on the crown. Katharine knows the crown is her only chance at revenge. Mirabella feels the crown is her right as the strongest heir but she isn’t sure if she wants it. Arsinoe knows she is unlikely to survive the year but she is determined to stay alive for as long as she can. Three sisters, three dark magics, one crown in Three Dark Crowns (2016) by Kendare Blake.

Three Dark Crowns is the start of a series. The book follows Katharine, Mirabella, and Arsinoe in close third person narration. Snippets of the story also follow those closest to the sisters as all three move inexorably toward the battle for the crown.

Blake expertly brings the island of Fennbirn and its strange customs and fierce traditions to life. Evocative prose and vivid landscapes make the island a secondary character in the novel as different parts of Fennbirn are revealed in each chapter.

Magic on this island has a cost, as does the right to rule, and throughout the novel all three sisters pay dearly. Katharine, Mirabella, and Arsinoe are distinct characters with ambitions that have demanded they harden their hearts and make great sacrifices.

Three Dark Crowns is dark fantasy at its finest and most tense. Page-turning action contrasts with moments that will leave readers breathless. Intricate plotting, surprising moments of intersection between the characters, and shocking twists make this a must-read. Highly recommended.

Possible Pairings: Girls Made of Snow and Glass by Melissa Bashardoust, The Scorpion Rules by Erin Bow, Graceling by Kristin Cashore, The Gilded Wolves by Roshani Chokshi, The Bone Witch by Rin Chupeco, Rule by Ellen Goodlett, Grave Mercy by Robin LaFevers, Finnikin of the Rock by Melina Marchetta, A Confusion of Princes by Garth Nix, Four Dead Queens by Astrid Scholte, A Darker Shade of Magic by V. E. Schwab, The Scorpio Races by Maggie Stiefvater, The Girl King by Mimi Yu