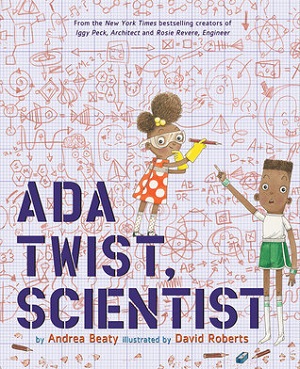 Like her classmates Iggy Peck and Rosie Revere, Ada Twist is an unusual second grader. Ada is curious and full of questions. “Why are there pointy things stuck to a rose? Why are there hairs growing inside your nose?” All day, she peppers her parents with inquisitive questions.

When a noxious smell fills her house, Ada sets out to use the scientific method to figure out what is behind that foul odor. But in her search for answers Ada also ends up scaring the family cat and annoying her brother and parents. It’s not easy pursuing scientific discovery, but luckily for Ada she has her family’s full support once they stop to think about everything this girl dynamo has already discovered in Ada Twist, Scientist (2016) by Andrea Beaty, illustrated by Dave Roberts.

Beaty and Roberts continue their delightful series of companion pictures that began with Iggy Peck, Architect and Rosie Revere, Engineer.

This time around Ada is inspired by scientists such as Marie Curie and, as her name suggests, Ada Lovelace. While I am very fond of this series, previous installments missed opportunities to include a more diverse cast of characters. The author and illustrator work to correct that here with Ada and her family. Ada is a thoughtful, intelligent, black girl and aspiring scientist–something we need to see more often in picture books (and other books for children and teens).

While Ada encounters some pitfalls on her way to becoming a scientists she remains curious and persistent. This story includes rhyming text that rolls trippingly off the tongue and cartoon-like illustrations filled with details to draw readers into the story. Ada Twist, Scientist is a smart story that is sure to inspire many young scientists. A winner for storytimes and one-on-one readings. Recommended.