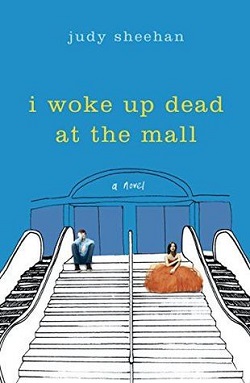 Sixteen-year-old New Yorker Sarah Evans is shocked when she wakes up dead. At the Mall of America. In Minnesota. Wearing the mango chiffon bridesmaid gown she had on when she died.

Along with fellow teen murder victims Harry (cancer, although that isn’t technically what killed him), Lacey (pushed off a roof), Alice (she doesn’t want to talk about it), and the oh-so-dreamy Nick (gunshot to the chest), Sarah is supposed to use her time at the mall to prepare to move on. The only problem is that Sarah can’t believe anyone would want to murder her when she spent her entire (short) life determined to be ordinary.

Interfering with the living is against the rules according to her annoyingly chipper “death coach,” Bertha, but Sarah knows her father is in danger and that she is the only one who can help in I Woke Up Dead at the Mall (2016) by Judy Sheehan.

I Woke Up Dead at the Mall is Sheehan’s first novel.

Sarah’s snark-filled, first person narration meshes well with the madcap quality of this story. This novel sidesteps religion by presenting the Boy (AKA “Boss of You”) as the ultimate authority figure in the afterlife while also keeping things like angels separate from any faith-based interpretations.

Unfortunately these seemingly arbitrary alternatives also provide little in the way of world building for the fantasy elements of this story. Pop culture references, including a years-too-late cameo by Oprah, lend a dated and out-of-touch quality to this otherwise strong plot.

In this offbeat ghost story Sarah uses her uncanny haunting abilities, along with some help from her new friends, to make sense of her afterlife and save the day. I Woke Up Dead at the Mall is a fun read but it is also slight and shockingly lacking in diversity for a novel that draws its cast from New York City. One note characters with vague motivations further diminish the overall impact of this novel.

I Woke Up Dead at the Mall starts with an interesting premise that sadly never realizes its potential. Sheehan’s quirky vision of the afterlife ultimately leads to a meandering story with a mixed bag of plot points and an ending that ties things up with a too-neat bow.

Possible Pairings: Blackfin Sky by Kat Ellis, The Accident Season by Moïra Fowley-Doyle, Last Night at the Circle Cinema by Emily Franklin, Dreamology by Lucy Keating, The Devil and Winnie Flynn by Micol and David Ostow, The Mystery of Hollow Places by Rebecca Podos

2 thoughts on “I Woke Up Dead at the Mall: A Review”