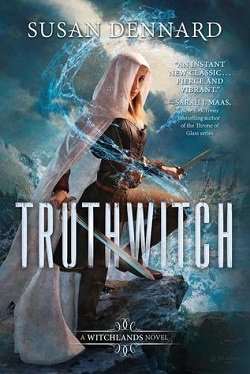 Magic is as common as breathing in the Witchlands. But not all witcheries are created equal as two Thread Sisters know all too well.

Safiya is a Truthwitch able to use her magic to tell when someone is lying to her while Iseult is a Threadwitch able to see the threads that bind everyone together–except for her own.

Together, they have spent years keeping Safi’s witchery a secret, knowing that it could be seen as a valuable tool or a dangerous weapon. Safi and Iseult are used to getting into trouble as they prepare for the life they’d like to lead together free of societal obligations and pressures.

When a Bloodwitch catches Safi’s scent, both girls are forced into hiding as fugitives. With the help of their witcheries and unlikely allies including a Nubrevnan captain (and Windwitch) named Merik, Safi and Iseult might be able to survive the storm that is coming. But only if they can manage to stay together in Truthwitch (2016) by Susan Dennard.

Truthwitch is the start of Dennard’s new Witchlands series.

This book is written in alternating close third-person perspectives. The majority of the story follows Safiya and Iseult although Merik and Aeduan (the Bloodwitch) also carry key parts of the narrative.

In any ensemble book, there is the risk that one character will be more appealing than others. That risk is compounded when the character is decidedly not the center of the narrative. Given the strong theme of friendship and camaraderie, it’s easy to argue that Safi and Iseult are equally important to the story. On the other hand, in a book called Truthwitch, perhaps it isn’t surprising that the story revolves around the decidedly less interesting Safi instead of Iseult.

Many novels are based on the idea that the main character is unique or important. Safi, as a rare Truthwitch, is both. She is also, like many of these same unique and important characters, essentially the worst at what she does. Safi tries to keep her witchery a secret. She fools no one. Safi tries to save her friend. She almost gets that friend killed. In other words, Safi is reckless and thoughtless and shows almost no growth by the end of Truthwitch.

Breakneck pacing and a shoe-horned romance (plus fairly clear foreshadowing of future “ships”) flesh out the story without much nuance. While Dennard has created a complex world with well-researched details, Truthwitch never lingers long enough on any one piece to let readers appreciate these details.

Truthwitch is an interesting start to a new series sure to appeal to readers looking for new lighter fantasy fare. Ideal for readers seeking an action-heavy, plot-driven story.

Possible Pairings: Children of Blood and Bone by Tomi Adeyemi, Realm Breaker by Victoria Aveyard, A Season of Sinister Dreams by Tracy Banghart, Six of Crows by Leigh Bardugo, Passenger by Alexandra Bracken, Roar by Cora Carmack, The Reader by Traci Chee, The Gilded Wolves by Roshani Chokshi, The Never Tilting World by Rin Chupeco, Witchlanders by Lena Coakley, Chasing Power by Sarah Beth Durst, Scarlet by A. C. Gaughen, The Girl at Midnight by Melissa Grey, The Glass Sentence by S. E. Grove, Rebel of the Sands by Alwyn Hamilton, The Nameless City by Faith Erin Hicks, Forest of Souls by Lori M. Lee, Furyborn by Claire Legrand, Daughter of the Pirate King by Tricia Levenseller, Throne of Glass by Sarah J. Maas, Angel Mage by Garth Nix, The Kiss of Deception by Mary E. Pearson, There Will Come a Darkness by Katy Rose Pool, Dreams Lie Beneath by Rebecca Ross, Iron Cast by Destiny Soria, Song of the Current by Sarah Tolcser