All week you can follow the blog tour (click to see the full schedule) for interviews with authors talking about their own comics, what they love about the genre, and more.

Today I’m hosting a Q&A with Scott Westerfeld, author of Spill Zone. Scott Westerfeld is the author of the worldwide bestselling Uglies series and the Locus Award–winning Leviathan series, and is co-author of the Zeroes trilogy. His other novels include the New York Times bestseller Afterworlds, The Last Days,Peeps, So Yesterday, and the Midnighters trilogy.

Tell us your first memory of reading a comic or graphic novel.
Scott Westerfeld (ST): My first little-kid comics were Casper the Friendly Ghost. He’s the ultimate visual character, thanks to the weird physics of his incorporeal body. I don’t think you could do those gentle but highly disconcerting sight-gags in any other medium. (If you don’t know what I mean, google “Casper Ghost Physics.”)
What’s your favorite comic or graphic novel, and what do you love about it?
ST: I love all deconstructions of comics, so I was tempted to say The Boys or something gritty like that. But really, Unbeatable Squirrel Girl is the best self-aware meta-comic going right now. The writing and art are crisp and sharp, the perfect combination of sweet and knowing.
Tell us a little about your latest graphic novel.
ST: Spill Zone is set three years after a strange event destroyed the hometown of 20-year-old Addison Merritt. Nobody knows what the Spill even was, but it took her parents and left her little sister silent. (Except for psychic conversations with a creepy doll.) Now Addison supports them both by sneaking into the Zone to take photographs, which sell as a mysterious, voyeuristic outsider art. And then one of her collectors offers her a million dollars to bring more than photographs out of the Zone. (My elevator pitch: Stranger Things with motorcycles.)
What comic or graphic novel are you reading now?
ST: The Best We Could Do by Thi Bui. An amazing immigrant family memoir, stretching from the bloody division of Viet Nam to blue-sky California in only a few decades. An amazing look at how history imprints itself across generations.
Remember, check out the other tour stops for more interviews. I’ll leave you with some more information about Spill Zone: 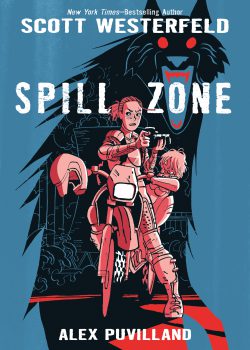 Three years ago an event destroyed the small city of Poughkeepsie, forever changing reality within its borders. Uncanny manifestations and lethal dangers now await anyone who enters the Spill Zone.

The Spill claimed Addison’s parents and scarred her little sister, Lexa, who hasn’t spoken since. Addison provides for her sister by photographing the Zone’s twisted attractions on illicit midnight rides. Art collectors pay top dollar for these bizarre images, but getting close enough for the perfect shot can mean death—or worse.

When an eccentric collector makes a million-dollar offer, Addison breaks her own hard-learned rules of survival and ventures farther than she has ever dared. Within the Spill Zone, Hell awaits—and it seems to be calling Addison’s name.