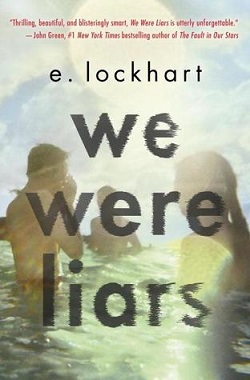 A wealthy, respected family. Summers on a private island. Four friends, the Liars, who have the world at their fingertips. First loves. Memories. Lies. And, eventually, the truth.

Until one accident–one mystery–changes all that and nothing can ever be the same in We Were Liars (2014) by E. Lockhart.

E. Lockhart delivers another smart, layered story here with writing reminiscent of her Printz honor title The Disreputable History of Frankie Landau-Banks. It’s impossible to say much more without revealing too much.

We Were Liars is an incisive story of privilege, loss and a few other things besides. While the themes and fallout are often cutting, even tragic, the story still offers moments of optimism as well as an evocative island setting.

Written with layers upon layers of meaning as well as subtle clues, We Were Liars is a sensational read that will leave readers as shocked as they are satisfied. With so many twists, this is a story most will want to re-read moments after turning the last page.

Possible Pairings: The Leaving by Tara Altebrando, The Vanishing Season by Jodi Lynn Anderson, Chime by Franny Billingsley, The Game of Love and Death by Martha Brockenbrough, All Fall Down by Ally Carter, The Graces by Laure Eve, The Accident Season by Moïra Fowley-Doyle, The Careful Undressing of Love by Corey Ann Haydu, And We Stay by Jenny Hubbard, The Last Time We Were Us by Leah Konen, Liar by Justine Larbalestier, A Fierce and Subtle Poison by Samantha Mabry, The Weight of Feathers by Anne-Marie McLemore, The Cousins by Karen M. McManus, Madapple by Christina Meldrum, The Astonishing Color of After by Emily X.R. Pan, Pretending to Be Erica by Michelle Painchaud, Even in Paradise by Chelsey Philpot, I Am Princess X by Cherie Priest, Bone Gap by Laura Ruby, You Are the Everything by Karen Rivers, Daughter of Deep Silence by Carrie Ryan, Saint Death by Marcus Sedgwick, The Edge of Falling by Rebecca Serle, Wild Swans by Jessica Spotswood, Confessions of the Sullivan Sisters by Natalie Standiford, Imaginary Girls by Nova Ren Suma, Places No One Knows by Brenna Yovanoff, Code Name Verity by Elizabeth Wein, Wherever Nina Lies by Lynn Weingarten, The Space Between Trees by Katie Williams