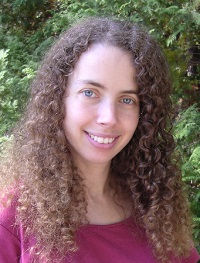 Sarah Beth Durst is here today to talk about her latest middle grade novel, The Girl Who Could Not Dream. This book is a ton of fun. It’s about a girl whose family sells dreams, a monster named Monster, ninja bunnies, and more!

Miss Print (MP): What was the inspiration for The Girl Who Could Not Dream?

I don’t mean that the story came to me in a dream — it didn’t. But once, I had this magnificent dream in which I was a dragonrider tasked with defending the planet against alien ninja robots… and then I forgot what happened.

You see, I have always had vivid dreams that slip away in the glare of the day’s light, and I’ve always wished I could bottle up those dreams to re-live later.

In THE GIRL WHO COULD NOT DREAM, Sophie and her family own a dream shop where they buy, bottle, and sell dreams. Drink a bottle, and you’ll dream that dream.

So really, the inspiration was: I want my own dream shop!

MP: Sophie is the youngest character you’ve had since your debut novel Into the Wild. How was it writing a younger middle grade novel again?

SBD: I love writing for all ages — there’s something wonderful and magical about each age group. Right now, for example, I’m working on an epic trilogy for adults and loving every second. It’s such an immersive experience. I’m also working on a picture book, and there’s a great joy to be found in playing with such precision of language.

When you write about a twelve year old experiencing her first adventure, you get to feel and see and experience all those firsts with her.

MP: Sophie’s parents run a dream shop where they sell dreams (and nightmares!) to buyers of all kinds. If you could buy any dream, what would it be? Is there any dream you’d like to get rid of or sell to someone else?

SBD: I’d buy a dream that was like the books I love: fantasy. Give me a dragon or a talking wolf or an enchanted sword, and I’d be happy.

As for any dream I’d like to get rid of… you can take the boring ones. I could do without any more missing-the-train or can’t-find-the-bathroom dreams, thank you very much.

MP: As the title suggests, Sophie does not have dreams. If you had a choice would you want to give up dreaming?

SBD: Never! I often lie still in the morning trying to remember every second of my dream before it slips away. They fade so very fast!

MP: I love the cover of this novel because it does such a good job of bringing the characters from the story to life, especially Sophie’s best friend Monster. Where did he come from? Did you always know what he would look like?

SBD: The cover art was done by Andrea Femerstrand, and I think she did an absolutely fantastic job. Monster looks EXACTLY like I pictured him. I swear she scooped him right out of my brain. Those lemur eyes! And the golden tongue! She captured his attitude perfectly too.

Monster was born fully-formed in my imagination. I knew from the very first paragraph of the novel what he looked like, what he sounded like, and the fact that he really, really loves cupcakes.

Don’t tell my other characters, but he’s actually my favorite that I’ve ever written. I want my own Monster!

MP: Did you have a favorite dream creature to write about in this novel? (I’m especially partial to the ninja bunnies!)

SBD: Monster, obviously. And I love my ninja bunnies. The one who surprised me as I was writing, though, was Glitterhoof, the arrogant, rainbow-pooping unicorn. He trotted onto the page and insisted he play a role.

(It’s really disconcerting when characters do that, especially since I always write with an outline. But I’m happy to toss out the outline if my subconscious presents an option I like better. Writing a novel is often an exercise in trusting yourself. You have to believe in your own innate sense of story and character. It’s not always easy, but if you don’t, well, that’s often where writer’s block comes from. Trust yourself!)

MP: Which scene are you especially excited for readers to get to in The Girl Who Could Not Dream?

SBD: I am most excited for readers to meet Sophie and Monster. They became my friends as I was writing them, and I hope they’ll become readers’ friends too.

But if you want a specific scene… I think Monster and the chocolate milk.

MP: You have a lot of novels in the works. Can you tell us anything about your next projects? (Do you think you’ll ever return to Sophie and her family?)

SBD: Right now, I am working on an epic fantasy trilogy for adults. The first book is called THE QUEEN OF BLOOD, and it will come out in fall 2016 from Harper Voyager. It’s about bloodthirsty nature spirits and the women who can control them, and I’m so, so, so excited about it!

If you want to know more about The Girl Who Could Not Dream be sure to check out my  review.

4 thoughts on “Author Interview #7: Sarah Beth Durst on The Girl Who Could Not Dream”