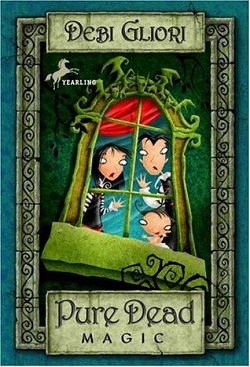 Debi Gliori‘s novel Pure Dead Magic (2002) first caught my attention as a library page for two simple reasons: the unique title and the rather enticing plaid background of the cover (which also features a neat illustration by Glin Dibley). Before embarking on Pure Dead Magic, a work of longer fiction, Gliori had written and illustrated picture books for children. I have seen this book, the first in a trilogy, shelved both with children’s and young adult books. I’m more inclined to call it a children’s book although I also have no problem imagining teens who would enjoy it. That said, let’s talk about what happens between the covers of this book.

Twelve-year-old Titus Strega-Borgia and his ten-year-old sister Pandora do not live in what most people would term a normal household. Things are strange at StregaSchloss, the family’s house near the Scottish Highlands, even before their father Luciano mysteriously disappears. Dealing with an unwieldy household while completing her degree in advanced witchcraft, Baci Strega-Borgia is overextended. Enter Mrs. Flora McLachlan who tries to bring some order to the household along with fries that are crispy on the outside and soft in the middle, and the occasional lullaby for Damp, the youngest of the Strega-Borgia children.

But order doesn’t reign for very long at StregaSchloss before things get out of hand. Thirteen baby rats go missing, followed soon after by Damp. Then the gangster in the rabbit suit shows up and everything gets even messier.

If any of the plot brought to mind the Addams family, it’s not a coincidence. I have no proof for this, but feel strongly that the Strega-Borgia’s might be distant cousins of Morticia and Gomez. Gliori pulls off a blend of humor and the macabre, with the odd man-eating monster thrown in, admirably and much in the style so common to the Addams family movie.

Needless to say this novel does require a willing suspension of disbelief, but once you get into the story it’s really fun. Gliori’s prose is straightforward and broken up into manageable chapters (usually four or so pages at a time) which make it a good pick for a reluctant reader who might not want to read a long chapter in one sitting.

The characters are also excellent. In addition to the family and staff, several mythical beasts and one hungry crocodile also add a lot of dimension to the book. Pure Dead Magic is one of those books that, if you can tolerate some fantastical elements, has something for everyone: a variety of characters, excitement, suspense, and humor. A well-rounded book for anyone looking for a story that will leave them smiling.