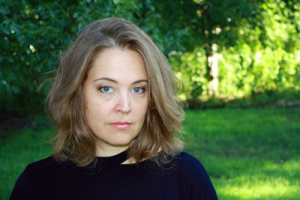 Tessa Gratton’s Songs of New Asgard is one of my favorite series and one I wish more people could find. The series concluded in 2015 with The Apple Throne. Tessa is here today to talk about this final installment in the series.

Miss Print (MP): What was the inspiration for The Apple Throne?

Tessa Gratton (TG): The first draft of THE LOST SUN was from Astrid’s point of view. About a third of the way in I realized I was telling Soren’s story and that the part of Astrid’s I was most interested in begins at the very end of that book. So really, the inspiration for TAT was part of my original inspiration for the entire series: Astrid was the very first character I created to live in the United States of Asgard. I wanted to explore religion and politics in an America founded by Vikings and their gods, so I needed a character involved in both. That was Astrid, because she has faith in a religion that seems faithless, and is very invested in making her country stronger and better. As a prophet, she has the power to do that, just like her mother did. She was, in essence, born for both religion and politics in the US of Asgard.

When I got to actually developing the Apple Throne, my core inspiration was the question: how does a human girl exist when she’s been made into a goddess, but is still just herself, with her same desires and loves and fears?

MP: You chose to self-publish The Apple Throne when the series was cancelled by its original publisher. What has it been like handling the publishing side of things on your own?

TG: Terrible. LOL. I was not made, personality-wise, for self-publishing. I am a writer, and that’s all I’m interested in, not the important tasks of marketing and choosing design and hiring copy editors and figuring out formatting and all the ins and outs of Kindle/Createspace/iBooks, etc etc etc. I just want to tell my stories and argue on Twitter.

MP: As part of that shift to self-publishing, you also reissued the entire series with new covers. Can you talk a bit about the redesign? Do you have a favorite new cover or an element you were excited to add to any of the new covers?

TG: YES! The covers were the only fun part of self-publishing. I worked with Saundra Mitchell who is wonderful. She was tireless in her quest to find exactly what I was looking for—or in a few cases, exactly what I didn’t even know I needed!

I have never been a fan of the original hardcover design for The Lost Sun. My publisher and I went around and around and finally it was time to just settle or move the publication date. (There was a lot going on at the time, including the Penguin-Random House merger that led to a shake-up in all the people I was working with.) However, I talked with my agent and the agency’s digital marketing person, and we decided it would be best to not deviate TOO far from the original hardcovers, so that The Apple Throne matched them in essence, though we hoped to eventually redesign the whole series (which we did!).

My favorite is probably The Lost Sun, though I think The Apple Throne is the most beautiful. But I never got to see Soren on the cover, despite the face originally on the hardback. Saundra and I spent hours and hours looking for images of young men who could be Soren that I could afford to buy the rights to. So although he’s not perfect (the model is not of Samoan descent like Soren), he is so close in looks and haunted berserker attitude it gives me a feeling of triumph to look at that cover.

MP: I loved Astrid’s growth over the course of this novel. In The Lost Sun Astrid is a very confident character. She understands her place in the world as a prophet and she knows how to work within that role to accomplish what she needs and wants to accomplish. In The Apple Throne a lot of that is lost to Astrid as she is no longer a prophet but Idun of the Apples. How did you go about channeling that change in her character and giving voice to this new aspect of Astrid’s life?

TG: I think this kind of change is something many people deal with—I have myself. It’s that thing where you think you get what you wanted, and it turns out to change everything. The goal you’ve worked toward and the choices you make add up to something amazing, but so far beyond and different from what you expected it feels like the world is upside down. With Astrid, that’s very literal: she’s lost herself *literally* except in the memories of a very few people. Her name and purpose have been changed, and she chose that, but there are unforeseen consequences. I thought through the layers of emotional and physical ramifications as I worked, developing her trajectory alongside developing the metaphor and character arcs I wanted to play with. I wanted her to rediscover herself, and take the parts of herself she knew and the parts that were new to her and merge them. This was about Astrid staying true to herself and her choices, while at the same time meeting new challenges to continue making the world better—which was always her goal. So in a lot of ways it was a post-teen story, a story about becoming an adult.

Plus, like you said, Astrid has always been confident, so really all I had to do was take that confidence away and help her find it again. That’s what we frequently ask ourselves as writers: what is the worst thing I can take away from this character? And that becomes the challenge/conflict.

MP: Is there any scene that you are particularly excited for readers to discover in this novel?

TG: Oh, wow. Any of the scenes when Astrid’s world and Signy’s collide. They’re both so powerful, I loved having them together so I could watch and create sparks, and try to find ways for their power to complement each other and also challenge each other. Soren is great, a wonderful cinnamon roll, but really he’s a vehicle for exploring a lot of powerful women in this series.

MP: The Apple Throne strikes a great balance between new characters and familiar favorites from the other books in the series. Which character are you excited for readers to meet in this book? Favorite character from the series?

TG: Thank you! In this book I think I’m most interested in people meeting Sune Rask, and Amon along with him. I love writing their dialogue and exploring their very long, fraught relationship.

Glory is probably my favorite in the whole series. The Fenris Wolf, destined to devour the sun and end the world as teenaged girl? MY HEART. Her novella Glory’s Teeth was a dream to write. Falling into her world and voice and desires was like my desert after all the difficulties of writing Signy’s story. (I love Signy, but our relationship is even more fraught than Sune and Amon’s.)

TG: YES! I have two new books coming in 2018: THE QUEENS OF INNIS LEAR from Tor. It’s my adult fantasy debut, a retelling of King Lear full of sisters, betrayal, magic, murder, feminism, and love. The other is SLAUGHTER MOON, a standalone YA from McElderry, about toxic masculinity, a magical forest, sacrifice, and witches.

Thanks again to Tessa for another great interview and always being up to chat with me on the blog. You can also read my review of The Apple Throne here on the blog and visit Tessa Gratton’s website for more info about her and her books.

You can also enter my giveaway to win ebooks of this trilogy!