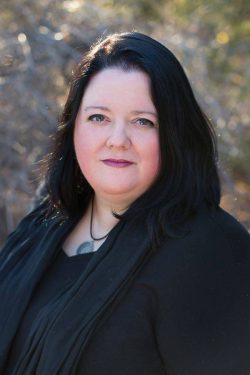 This summer I was lucky enough to read an advance copy of Lock & Mori by Heather W. Petty. As a fan of Sherlock Holmes in almost any form, you can imagine my excitement about this modern version where the main character is Moriarty. Needless to say, this book completely lived up to (and maybe even exceeded) my very high expectations and I am thrilled to have Heather here to talk a bit about the book and series today.

Heather Petty (HP): I was always a huge reader, but I never thought of writing myself until my high school English teacher, Author Terri Farley (Phantom Stallion series) read an assignment I’d turned in and basically told me I needed to be writing. So, I joined the school paper. Then, in college, when I was kind of over the Journalism thing, I applied for a fiction writing class with Author Susan Palwick, who later taught me one-on-one. She really helped me find my niche as a kidlit writer.

I joined SCBWI shortly after I graduated, and my very first critique (of a really horrible middle grade book) at a conference was from Ellen Hopkins, whose debut novel CRANK was coming out later that year (2004). (Crazy, right?) She was very patient with my rookie writer ways and encouraged me to keep going. But I had a baby the next year and floundered for a bit with my writing until Author Cynthia Cotten read one of my silly LiveJournal posts one night and told me I should be writing YA. She pointed me in the direction of authors like Melissa Marr, Charles de Lint, and Holly Black. I was especially taken by Holly Black’s Tithe series, and started writing my own YA within days of reading VALIANT.

I got my first agent in 2009 with an Urban Fantasy novel about faeries at summer camp, but the market was already shifting away from Paranormal/Urban Fantasy (Twilight craze) toward Dystopian (Hunger Games craze), and I had zero interest in writing Dystopian. So I wrote a lot of paranormal and urban fantasy that had zero chance of selling, but still taught me a lot about crafting novels. And right before my second agent decided to retire from the business, I came up with this idea about a female Moriarty meeting Sherlock Holmes in high school. It took me a while, but I finished the book and found my current agent (who is a rockstar goddess)…and she sold the book in fall of 2013.

MP: What was the inspiration for Lock & Mori? What drew you to Sherlock Holmes as source material?

HP: I read an article on nemesis relationships, where the writer mentioned offhand that everything we know about Moriarty is what Sherlock tells us. He’s the only one who meets Moriarty in the canon. Those kinds of gaps are like chocolate cake to writers. Pretty much any time I can ask the question “What if?” I get super excited. In this instance, I thought, what if Sherlock lied to Watson for some reason? What if he’d known Moriarty since they were kids? What if something that happened when they were kids is why they’re rivals as adults? The story kind of spiraled out from there.

MP: Working off the last question, in the original stories, Moriarty is a villain. Period. What drew you to Moriarty as your narrator and protagonist? How did you go about reframing a villain as the hero of her own story?

HP: The whole idea of taking the characters back to their teen years creates an opportunity to reverse engineer a master detective and master criminal to who they might have been before. And really, Sherlock has been analyzed and dissected over and over in almost every iteration, so I felt like the more unexplored path was to tell Moriarty’s story. It was also more freeing, because we know a lot less about Moriarty, so I was able to craft her character any way I wanted within very few canonical parameters.

That said, I also knew it would be a challenge, because she had to eventually become the villain, which meant she would have to have a personality that might be hard to connect with for some readers. It also meant that she’d start making decisions that aren’t what we’re used to seeing from heroes in books. So, I’m always walking the line of making her someone a reader can at least empathize with and staying true to the direction she needs to take.

Still, the idea of getting to create a female villain who uses her intelligence as a weapon instead of her sexuality was too great a lure to stay away.

MP: While we’re talking about characters, did you have a favorite character to write in Lock & Mori? Is there any character you are particularly excited for readers to meet?

HP: Probably Mycroft. He’s always been a favorite in Sherlock pastiches, so it was fun to craft a younger version for my own.

MP: Lock and Mori are often similar characters in terms of their interests and capabilities although they also have very different ideas about what is right and what is necessary. Do you see yourself more as a Lock or a Mori?

HP: I’m probably a mix of both. I tend to have an overactive sense of justice, but I don’t believe in the law as strictly as Lock does in the book. I’ve seen how the law can be manipulated by politics, institutional biases, and bigotry.

MP: Lock & Mori is set in modern London. Did you always know this story would be in a contemporary setting? How did you decide which locations to feature in the story? Do you have a favorite location of the ones you featured?

HP: I’m not really interested in writing a historical right now, so making the decision to pull the story into a contemporary timeline was pretty easy. The locations were mostly all within the neighborhood of Baker Street, where they live and go to school. Having Regent’s Park so close was an amazing resource, because there are so many different aspects to that park. But my favorite locations were those outside of the city, if I’m being honest. I’ve probably watched/read one too many mystery that takes place in a small English village to keep my characters housed in London for the entirety of any book.

MP: A big part of this novel is, of course, the mystery surrounding the murder in Regent’s Park. As a writer, how did you go about pacing this aspect of the story and deciding what to reveal when?

HP: I’ve always been a huge mystery fan, from when I was a kid. And I think after you’ve read your 3948598345th mystery novel, you kind of get a feel for it. But still, writing any mystery is intimidating, probably because I’m such a fan. So I read a lot, now as a writer, watching how my favorite mystery authors craft their clues and pace out their novels.

Sherlock mysteries are a little different, though, because the Sherlock canon is more “CSI: Victorian London” than a traditional whodunit. In fact, in a lot of the Sherlock stories, you know who did it pretty early on, the rest of the narrative is just about either how Sherlock figures it out (usually told to Watson after the fact either by Sherlock or by the criminal in his super-long confession speech) or how Sherlock lays a trap to prove who did it (followed by how he figured it out).

MP: Lock & Mori is the first book in a series. Do you have a set arc for Mori’s story?

HP: Yes. When you sell a series, you write a general synopsis of the following books. My arc shifted a bit as I wrote (and rewrote) the second book, but I have a pretty firm handle on how everything will play out from here. And I always knew how I wanted to end the whole series.

MP: Can you tell us anything about your next project? (Semi-related: I’m dying to know if we’ll see Lestrade in this series.)

HP: If you mean book 2 of the Lock & Mori series, I can say that it’s written and I’m working on editing it now. No Lestrade in the series. Or, if he does magically appear, it’ll probably only be in passing. Because this is an origin story, I’m trying to preserve as much of how the canon plays out as possible.

HP: My biggest advice to writers isn’t very sexy or inspirational. Be willing to do the work.

We tend to have this romantic notion of what it means to be a novelist. I’ve met plenty of writers who just want the romance of typing out their novels, each word inspired by their own in-born creative genius, so that typing THE END means the book is ready to go to print. And that’s an awesome fantasy, but the reality is that the greatest novelists pour their hearts and souls onto the page, then go back and shred apart all of their favorite bits and cut out inspired passages altogether, then rework the entire middle, because nothing is sacred. You have to be willing to do the work if you really want to create something great. And you have to be willing to do it over and over again, because writing a book is a months long marathon, not something you do in an afternoon between solving crimes with your girlfriend. (Looking at you, Castle.)

Thanks again to Heather for this awesome interview.

You can see more about Heather and her books on her website.

You can also read my review of Lock & Mori here on the blog.