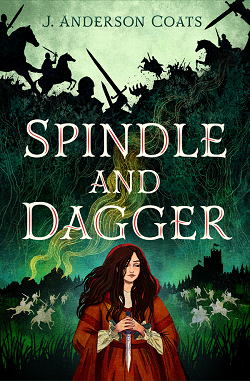 Wales, 1109: When Elen’s home was raided by a warband three years ago her younger sister died in the ensuing fires. Her older sister was cut down just short of killing the warband’s leader, Owain ap Cadwgan. Despite the violence and her own sexual assault, Elen survived, healing Owain ap Cadwgan’s wounds and weaving a tale of protection.

She tells all who will listen that Owain ap Cadwgan cannot be killed–not by blade, blow, or poison–so long as Saint Elen protects him, so long as he keeps her namesake by his side.

None of what she tells them is true.

Balanced on a knife’s edge and haunted by echoes of the raid that killed her family, Elen knows one false step, one accident could leave Owain dead and render her own life forfeit.

When Owain abducts Nest, the wife of a Norman lord, and her children, war soon follows. As her lies begin to unravel, Elen dares to imagine a different life but first she will have to determine where her loyalties lie in Spindle and Dagger (2020) by J. Anderson Coats.

Elen’s first person narration is frank and immediately engrossing, drawing readers into the precarious world she has created for herself. With violence and danger everywhere, Elen is forced to be as calculating and as ruthless as the warband that is both her greatest protection and her greatest danger.

High action and battles contrast sharply with the choices Elen is forced to make to ensure her own survival. Coats’ evocative prose and themes of agency and feminism add nuance and depth to this otherwise fast-paced story.

Spindle and Dagger is brutal, bloody, and carefully researched historical fiction. Recommended for readers looking for fierce heroines and history with all the gory details.

Cecily’s father ruins her life abruptly and irrevocably when he announces his plan to move them to Caernarvon in occupied Wales. The King needs good Englishmen to manage the newly-acquired Welsh lands and teach the primitive Welshman how to behave. Cecily wants none of it but at least she will finally be the lady of the house. Even if it is a house among barbarians.

Unfortunately for Cecily her initial misgivings about Wales are confirmed when she discovers the native Welsh speak something that barely sounds like a language as well as being impudent and rude. Though they are at least Christians–supposedly. In addition to being saddled with a surly Welsh servant girl she cannot dismiss, Cecily is also looked down upon by the local honesti who consider her little better than the Welsh peasants.

Gwenhwyfar is equally unhappy as servant to the brat. While she scrambles to find enough food for herself and her family, Gwenhwyfar watches Cecily leading the life that rightfully belongs to Gwenhwyfar and the other displaced Welshmen. The English took everything from Gwenhwyfar and her people. Now all she can do is watch and try not to starve.

As the English take and take, frustration grows among the Welsh. As tensions rise both Cecily and Gwenhwyfar will be caught up in the disastrous moment when the tension finally has to break and there will be justice for those who deserve it in The Wicked and the Just (2012) by J. Anderson Coats.

The Wicked and the Just is Coats’ first novel.

Set in the years of 1293 and 1294 Coats expertly* captures a volatile period in history for Wales.

While I enjoy a great many historical novels, I usually do not gravitate toward medieval period books. In addition to being a period I know little about, it is also not always an area of high interest. That said, there was something about The Wicked and the Just that made me want to read it.

Perhaps you already know why 1293 marks an important time for Wales in history. I did not. I have to say going in knowing nothing save that Welsh is unpronounceable when I try to read it made for a dramatic finish to The Wicked and the Just. An ending, I might add, that completely took me by surprise.

With segments told from both Cecily and Gwenhwyfar’s points of view, the book is well-rounded and examines the tensions within the Welsh town of Caernarvon from every angle. While that makes The Wicked and the Just an excellent look at the period, it does not make for many likable characters. Every character has redeeming qualities, but each one is also very nasty. There is justice for those who deserve it, but there is also name-calling, pettiness, and plain old cruelty along the way making for a mid-point where almost no character warrants much admiration.

Coats ends the book with a historical note explaining the politics of the period that Cecily and Gwenhwyfar either ignored or only alluded to during the actual story. While historical events are explained and relatively resolved, much is left up in the air for the characters. While the lack of closure makes sense given the content of the story, I must admit it does leave quite a few questions about what happens to Cecily and Gwenhwyfar as well as some other secondary characters.

Coats’ writing is clear and hauntingly evocative of the period in this story of many, many displaced people. As much as any book can, The Wicked and the Just brings medieval Wales to life.

*I’m not kidding when I say expertly. In addition to being a fellow Master of Library Science, Coats has a master’s degree in history.

Possible Pairings: Black Potatoes by Susan Campbell Bartoletti, Finnikin of the Rock by Melina Marchetta, The Outlaws of Sherwood by Robin McKinley, The Winner’s Curse by Marie Rutkoski, Esperanza Rising by Pam Munoz Ryan, Between Shades of Gray by Ruta Sepetys