Snow has spent most of her like behind the walls of the Whittaker Institute. The high security asylum is meant to help rehabilitate troubled patients, like Snow, let go of their delusions.

Being near Bale makes like at the Institute bearable. At least until Bale claims he can see what Snow really is when they kiss. And breaks her hand in two places.

When mysterious hands grab Bale and pull him through a mirror, Snow knows that she has to follow. A voice in her dreams tells Snow exactly what to do in order to escape. Following the voices directions, Snow makes it outside and finds herself in the wintry world of Algid.

Snow soon learns that Algid is her true home and her father is determined to do everything he can to hold onto the throne–and keep Snow far away from it. As magic, mayhem, and trickery collide, Snow will have to decide who she can trust if she wants to rescue Bale and make it out of Algid alive in Stealing Snow (2016) by Danielle Paige.

Stealing Snow is the start of Paige’s new series which is a dark retelling of The Snow Queen.

Paige goes for a darker tone right from the start with Snow residing in an asylum that seems to come straight from the pages of One Flew Over the Cuckoo’s Nest. While this setting offers a gripping backdrop for the opening of the story, it also often defies logic as readers realize Snow has been at the Institute since she was a child (and is, in fact, still only seventeen suggesting there should have been at least some type of schoolwork or high school equivalency studies).

The story picks up considerably when Snow actually arrives in Algid and more of the novel’s characters are introduced. Snow finds a veritable band of misfits as she makes her way through Algid trying to find her father, the Snow King, and rescue her love Bale.

Along the way Snow encounters numerous love interests, her own snow magic, and vast conspiracies that stretch between Algid and our world. While this series opener raises many questions about Snow, her family, and Algid, readers will have to wait for future installments for most of the answers.

Stealing Snow is a fast-paced adventure with a sharp-tongued narrator who isn’t afraid to be ruthless. Paige takes some of the familiar elements of The Snow Queen and shakes them up with an inventive reimagining of the this fairy tale and the frighteningly evocative world of Algid. Recommended for readers looking for a new fairytale retelling that is extra dark.

As a girl, Cassie believed the story her grandmother told her. She believed that her mother was the daughter of the North Wind and a failed bargain with the Polar Bear King whisked her to the ends of the earth. For years, Cassie thought that one day she might be able to rescue her mother from the troll castle.

Cassie knows better now. Yes, her mother is gone. But Cassie has her father and their work at the Arctic research station where they live. Focused on her research of the local polar bear population and her ambitions to become a scientist, Cassie doesn’t have time for anything else–especially not fairy tales.

Everything Cassie has learned about the world and her own life is irrevocably changed when a polar bear speaks to her. He tells her that the stories about her mother really is alive and trapped at the end of the world. He tells Cassie that he will rescue her mother if Cassie agrees to marry him.

When Cassie accepts the polar bear’s bargain she will embark on her own journey through unbelievable wonders and countless dangers that will bring her east of the sun and west of the moon as she chases her truest desires for her future in Ice (2009) by Sarah Beth Durst.

Ice is a retelling of the Norwegian fairy tale “East of the Sun and West of the Moon.” (Which itself is reminiscent of the myth of Cupid and Pysche.)

Durst blends pieces from the original fairy tale and blends them with elements from Inuit culture. Ice also expands the source material to add context for the presence of a Polar Bear King with an original mythology where the polar bear (called Bear) is a shape-shifting being called a munaqsri who harvests dying souls and distributes souls to newborns. Durst masterfully brings these varied elements together to create a story that is faithful to the source material while also being utterly unique.

Cassie is a headstrong and decidedly modern heroine. Even when she is thrust into an unfamiliar world where magic is real, Cassie learns to adapt and manipulate situations to her advantage. While her initial decision to marry Bear is a calculated one meant to bring her mother home, Cassie’s feelings evolve as she begins to imagine a previously impossible future for herself beside her new husband.

Ice thoughtfully explores issues of choice as Cassie is forced repeatedly to place a value on her own free will. When she is separated from Bear she faces numerous obstacles while constantly running up against the question of how much she is willing to sacrifice in her efforts to find and rescue him. In addition Ice includes a nuanced treatment of what it means to be part of a family as well as what it means to grow up–two things that are central to Cassie’s character development.

Ice is a clever and evocative fantasy retelling. Sure to appeal to fans of the original fairy tale as well as fantasy fans in general.

Possible Pairings: Plain Kate by Erin Bow, Fire by Kristin Cashore, A Creature of Moonlight by Rebecca Hahn, Book of a Thousand Days by Shannon Hale, Winterspell by Claire Legrand, A Court of Thorns and Roses by Sarah J. Maas, East by Edith Pattou, The Woman Who Loved Reindeer by Meredith Ann Pierce,  The Glass Casket by McCormick Templeman 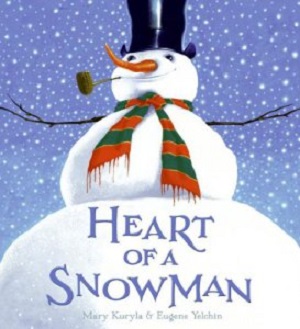 Every Christmas Eve, Owen builds the best snowman that he can. He knows that the at the heart of a snowman is a perfect snowball. And Owen is an expert on making snowballs (none of that slushy snow–good snowballs need powdery snow that’s a bit melty.) But no matter how perfect he makes it, the snowman always melts the next day on Christmas.

Owen is certain there has to be a way to help his snowman last longer. So, on Christmas Eve night, when a mysterious vessel abducts his snowman, Owen decides to follow in Heart of a Snowman by Mary Kurlya and Eugene Yelchin. What he finds is an immaculate factory where animals tear snowmen down to their snowflake components to make them like new–to make the perfect snowman. What the animals don’t realize is that the heart of a perfect snowman is the reason it can never last.

Heart of a Snowman is a weird book. The factory is clinical and, during the snowman disassembly phase, a bit frightening. On my first reading the book seemed a bit strange and I wondered at the story. But after re-reading it I feel more supportive. The audience for this book is narrow. With the Christmas aspect you’d have to be careful to balance it out to keep a storytime secular. Also, being a city child myself, I don’t know how universal the experience of building a snowman really is–I know I never built one.

On the other hand, keeping those caveats in mind, Heart of a Snowman does have a certain charm. The story, while strange, is endearing. And the illustrations are nothing short of remarkable. Definitely worth a look.