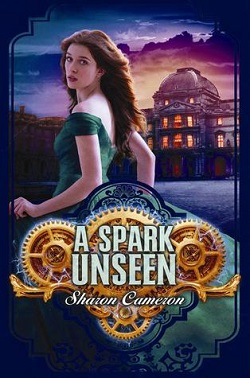 She just didn’t know she would be dealing with these circumstances on her own.

Nearly two years have past since Lane Moreau left Katharine behind at Stranwyne, promising he would return to her when he could. Katharine has been able, if not happy, to wait until Lane disappears. When she wakes in the night to witness a kidnapping attempt on her uncle, Katharine knows it is time to leave her beloved home.

She travels to Paris hoping to find answers and security for herself and those she holds dear. If she is very lucky, she hopes she will also find Lane.

Unfortunately nothing in Paris is as Katharine expects. Soon enough she caught up in a web of deceit and the political machinations of two governments. Everyone wants something from Katharine or her uncle. But only Katharine can decide whom she can trust in A Spark Unseen (2013) by Sharon Cameron.

A Spark Unseen is the followup to Cameron’s debut novel The Dark Unwinding. This story picks up two years after the events of The Dark Unwinding in 1854. After the opening chapters the majority of the novel is set in Paris, France.

Unfortunately, this book suffers for the location change. Stranwyne is so vivid and evocative that it became a character in The Dark Unwinding. By comparison, the Parisian atmosphere in this novel feels dry and unexciting and much of the beauty was lost with the French backdrop. While Katharine is still a delightful heroine even her charms seem diminished as the focus shifts in this book to a convoluted arms race centered around Uncle Tully and his inventions.

Cameron maintains a sense of urgency and page-turning tension throughout the story that will keep readers engrossed. However there is so much plot and so much action that it left very little room for the characters that readers came to love in the first book (or new characters for that matter). So many details had to be packed into such a small space that the entire novel felt rushed and much more plot driven.

A Spark Unseen ties up the story of Katharine and Lane (and Stranwyne) decently enough–fans of The Dark Unwinding will likely want to pick up this sequel to see what happens next. Either way A Spark Unseen remains a very different reading experience from its predecessor, not to mention losing much of the whimsy found in The Dark Unwinding. 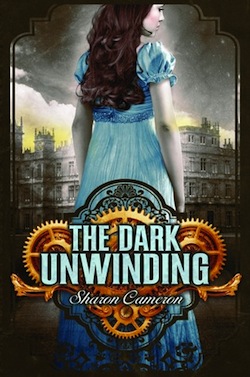 Katharine Tullman does not want to send her uncle to an asylum anymore than she wants to please her horrible aunt by doing so. Unfortunately Katharine very rarely gets to do anything near what she wants–not if she ever hopes to secure even the smallest bit of independence for herself.

When Katharine arrives at her uncle’s estate she soon realizes that dealing with her uncle is not going to be as cut and dry as she had hoped. Instead of a lunatic she finds her uncle is an incredibly gifted but eccentric inventor. Instead of a ramshackle estate near ruin she finds a village filled with workers rescued from London workhouses.

As Katharine explores the estate and learns more about her uncle, matters become more complicated as she is taken in my a handsome apprentice and an ambitious student. Soon, she realizes she is starting to care about her uncle and his household more than she can afford to given rising questions of her own future. And her own sanity.

With mysteries all around her and far more at stake than she can imagine, Katharine will have to decide who to trust and who to protect in The Dark Unwinding (2012) by Sharon Cameron.

In a delightful blend of suspense, steampunk and historical drama, Cameron has created a delightful world with compelling characters and a plot filled with twists and excitements. The story perfectly captures the wonder of Uncle Tullman’s estate and the urgency felt by everyone who wants to keep it safe.

The question of Katharine’s own sanity and the mysteries surrounding the estate add another satisfying dimension to the story. Best of all Cameron’s writing is wonderful throughout giving each character a unique voice and bringing them to life. The beautiful prose elevates what could have been a sensational action story into something more as Katharine is forced to confront of her own principles and grow as a character as her priorities (and loyalties) change.

The Dark Unwinding is a marvelous book that will linger with readers. The undercurrent of suspense and mystery make it a perfect read for a dark winter night.