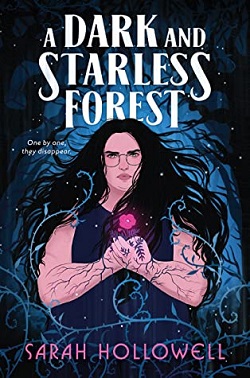 Derry has been living in a secluded house in the woods with her siblings and their protector, Frank, for years. They don’t have luxuries like cosmetics or snack foods or even new books and DVDs. They’re not spoiled at all. But they’re taken care of. They’re safe.

Which Frank has told them is much more important in a world that fears their magic. It’s the same reason he calls them alchemists instead of that more dangerous word: witches.

White, fat, sixteen-year-old Derry and her siblings dislike Frank and fear him even as Frank reminds them that he took them in when no one–not even their parents–wanted them. Derry and her siblings–eldest Jane (who is Black); Winnie (who is fat and white); Brooke (fat, Deaf, Mexican-American); white twins Elle and Irene (Irene is trans); nonbinary, Mexican-American Violet; and the youngest identical Black twins Olivia and London–have fierce bonds between them. Which makes it so much worse when first Jane and then Winnie disappear.

Frank says the girls must have died in the dense forest surrounding their home. But as Derry explores the forest she wonders if the disappearances might be tied to Frank himself.

As she learns more about Frank and her own magical affinity for growing both real and imagined plants Derry will have to decide how far she is willing to go to keep her loved ones safe in A Dark and Starless Forest (2021) by Sarah Hollowell.

Despite each sibling having distinct magical abilities, this element of the story is largely set dressing for the novel’s plot which is a blend of horror and suspense sprinkled with hints about a dark moment in Derry’s past that makes her reluctant to re-enter the forest in her search for Jane (and later Winnie). The novel is also notable for its focus on the bond between Derry and her siblings with a total absence of romance subplots.

Derry’s first-person narration amplifies the siblings’ isolation with a palpable fear of Frank and his punishments, including the dreaded time out room whose horrors are honed to each sibling’s worst nightmares (blaring lights and erratic, staticky noise for Derry). The restricted narrative works to amp up the tension but leaves many questions about how the siblings’ magic works and, more importantly, the implications of said magic in the outside world.

Hollowell is at pains to create an inclusive cast with some elements (Violet being nonbinary, Irene’s trans identity, everyone’s use of ASL–designated by single quotes around signed dialog–to communicate with Brooke) integrated into the narrative better than others. Derry’s quest to find her missing siblings and save all of them from Frank drives the story but leaves little room for character development of the other siblings who are often absent from the action and remain little more than names and attributes.

Derry’s moral ambiguity is unresolved by the end of the novel as she embraces darker choices to save her siblings heedless of the consequences. Questions about world building and what will come next for all of the siblings are also up in the air. A Dark and Starless Forest is a dark, inclusive blend of horror and extremely light fantasy. Ideal for readers looking for a slightly supernatural tale of suspense.