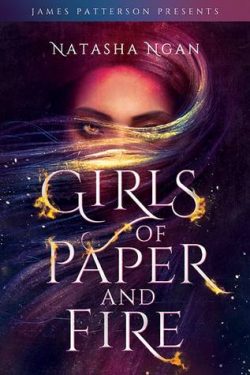 Every year eight girls are chosen to serve the king. His Paper Girls are the most beautiful, the most charming and demure. Once they are taken to the palace the Paper Girls live in luxury. But they are always slaves to the whims of the king and, especially, to his cruelty.

Once you become a Paper Girl, you can never go home again.

Lei never thought she would be chosen as a Paper Girl. Her family already paid the ultimate price when Lei’s mother was taken a decade ago. But rumors spread quickly about Lei–a human girl from the paper caste with golden eyes like the demons of the higher castes.

Taken against her will, trapped in a life she never imagined, Lei is determined to fight back. But even as she finds forbidden love and a plot that will change her world forever, Lei has to decide how far she’s willing to go for escape and for revenge in Girls of Paper and Fire (2018) by Natasha Ngan.

Girls of Paper and Fire is Ngan’s debut novel and the start of a new trilogy.

Lei’s first person narration is guileless but also razor sharp as she fights against her captivity as a Paper Girl at every turn. Her rage and frustration are palpable when she is kidnapped in the first pages of the novel and works from their to find a way not just to survive but to escape.

The brutality and horror of Lei’s new circumstances are contrasted with tender moments as she forms a dangerous and forbidden relationship with one of the other Paper Girls–a love that could lead to revolution and change throughout the country.

Ngan’s writing is lush and fast-paced. Readers are immediately drawn into Lei’s complex and often frightening world. Girls of Paper and Fire is a high action, feminist story that is as exciting as it is empowering.

Possible Pairings: Children of Blood and Bone by Tomi Adeyemi, Grace and Fury by Tracy Banghart, Eve by Anna Carey, Gravemaidens by Kelly Coon, The Good Luck Girls by Charlotte Nicole Davis, The Cerulean by Amy Ewing, Everless by Sara Holland, The Grace Year by Kim Liggett, The Glittering Court by Richelle Mead, The Traitor’s Game by Jennifer A. Nielsen, Beasts Made of Night by Tochi Onyebuchi, The Kingdom by Jess Rothenberg, Ash Princess by Laura K. Sebastian, Girls With Sharp Sticks by Suzanne Young