Fortuna Jane Belleweather has always been good with numbers. As the only winner of the most recent lottery jackpot, Jane know there are 58,642,129 to claim the ticket. And every one of them includes a dollar sign.

Unfortunately, Jane can also see four big problems that stand between her and the big prize:

Winning the lottery should be the luckiest thing to ever happen to Jane, but as she struggles with keeping her big secret and figuring out how to claim her winning’s she wonders if this is a case where a strike of luck is more bad than good in Lucky Girl (2021) by Jamie Pacton.

Jane narrates this standalone contemporary. Jane, like most of the small Wisconsin town residents, is white. Her best friend Brandon is Korean. Jane is bisexual.

Pacton packs a lot into a short novel as Jane comes to terms with her life-changing win and figures out how to claim her winnings (or if she even should). While this decision understandably drives most of the plot, Jane and her mother are also still grieving the death of Jane’s father and dealing with the aftermath (isolation for both of them and hoarding for Jane’s mom).

While some of the plot–particularly everything to do with Holden–can feel heavy-handed, Pacton delivers a very sweet slice-of-life story focused very squarely on Jane and her support system. Jane’s friendship with Brandon (and Brandon’s long-distance girlfriend who is in Australia) nicely centers this story and, once Jane comes clean, proves that she has more people in her corner than she realizes.

Lucky Girl is a fun bit of escapism that also thoughtfully tackles heavier themes of grief and loss. Recommended for readers seeking a change of pace in their next read.

Maddie doesn’t believe in luck. She believes in working hard and being realistic. She’d love to dream big like her Stanford-bound best friend but dreams like that have no place in Maddie’s reality.

When her eighteenth birthday turns into a total bust, Maddie decides to indulge in a little self-pity and a lot of whimsy when she buys a lottery ticket. Much to her dismay, the ticket wins big.

Before her win Maddie’s family is struggling with debt and barely managing with her overworked mother and unemployed father constantly fighting about money while Maddie’s older brother has taken time off from college to pay some of the loans he has already accrued. Maddie’s lottery money and her natural caregiver tendencies should solve all of their problems but, as Maddie learns, money can’t fix everything–especially people who may not want to be fixed.

Maddie also learns the hard way that money has the potential to change everyone she’s ever met as acquaintances and even strangers start asking for loans, friends question her behavior, and rumors start flying about her in the tabloids. Maddie’s one refuge is the zoo where her coworker Seth Nguyen seems to have no idea that Maddie is now a multi-millionaire.

Seth is charming, funny, and perfect the way he is now–when he doesn’t know Maddie’s secret. As they grow closer Maddie knows she has to tell Seth the truth. Soon. The only problem is that being honest with him might also mean losing Seth before he and Maddie have a chance to get closer in Lucky in Love (2017) by Kasie West.

West’s latest standalone contemporary novel is narrated by Maddie as she navigates her sudden change of circumstance along with all of the other uncharted moments that come with being a senior in high school. Her love of animals and work at the local zoo add a fun dimension to Maddie’s character and the plot.

Thanks to the lottery, Maddie learns to put herself first and also accept things she can’t control or change. In the midst of the lottery chaos Maddie also develops a sweet relationship with Seth–her Vietnamese-American coworker at the zoo. He gives her some much-needed perspective with his focus on film making and going with the flow even in the face of disheartening micro-aggressions and more overt discrimination. He remains easygoing and fun even when it feels like Maddie’s life is in chaos. Seth is a sweet and mellow counterpoint to hyper-focused overachiever Maddie.

Lucky in Love strikes the perfect balance between reality and wish fulfillment with a charming story sure to leave readers smiling. Lucky in Love is a winning ticket for any readers looking for a frothy and ultimately cheerful story about growing up and chasing your dreams–with or without a lottery win to back you up. Highly recommended.

Possible Pairings: What to Say Next by Julie Buxbaum, 29 Dates by Melissa de la Cruz, I Believe in a Thing Called Love by Maurene Goo, The Museum of Heartbreak by Meg Leder, American Royals by Katharine McGee, When Dimple Met Rishi by Sandhya Menon, Lucky Girl by Jamie Pacton, My So-Called Bollywood Life by Nisha Sharma, Girl Out of Water by Laura Silverman, Windfall by Jennifer E. Smith, Girl Against the Universe by Paula Stokes 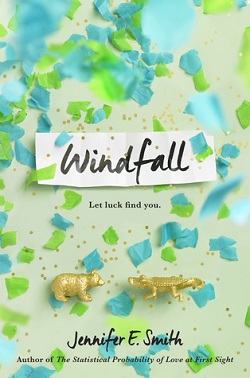 Alice buys a lottery ticket for her best friend Teddy–the boy she has loved from afar since freshman year–for his eighteenth birthday. It’s a small gift and it’s not likely to finally make Teddy reciprocate Alice’s feelings or even notice them. But it seems like a fitting gift.

Alice’s life already changed once when her parents died and she moved in with her aunt, uncle, and her cousin Felix. She isn’t sure she wants everything to change again even if the money is exactly what Teddy and his mother need after years struggling to overcome his father’s gambling debts.

Teddy has always been a constant in Alice’s life but in the wake of his luck changing it starts to feel like Teddy is changing too. But as Alice learns more about herself she starts to realize that maybe they’re both changing. And maybe that isn’t always a bad thing in Windfall (2017) by Jennifer E. Smith.

While Windfall is all about a big lottery win, this change of circumstance is often a backdrop in this character driven story. At eighteen, Alice is used to being an orphan and the stigma that sometimes comes from explaining her family history. What she isn’t used to, she realizes as she throws everything she has into her application to Standford, is defining herself without her parents.

Alice has always turned to the memory of her parents and their life in San Francisco as a guide for her own life which she has filled with tutoring and volunteering. But as Alice begins to make decisions about college and what comes next she realizes that modeling herself on her parents offers more questions than answers.

Alice’s confusion about her future and who she wants to be is complicated by Teddy’s lottery win. As questions of how to split, spend, and otherwise share the money come up Alice and Teddy’s previously breezy friendship becomes strained. In the midst of this Alice’s cousin Leo is dealing with the more concrete dilemma of what happens next when his boyfriend is in college in Michigan while Leo is still in Chicago.

Smith’s multifaceted story focuses on Alice and uses her grief and development as a lens for the rest of the story. Alice spends a lot of the novel viewing herself as an island set apart from the rest of her family–something that doesn’t always ring true when the loss of her parents is taken in the larger context of a familial loss affecting multiple people–but the ways she and her family come together by the end of Windfall is sweet and satisfying. Alice’s relationship with Teddy is similarly complex and a driving force of the plot.

Smith tackles questions of fate, privilege, and love in her latest standalone contemporary. Windfall is a smart and compulsively readable story about what happens when the impossible is suddenly not just possible but reality. A great choice for readers seeking a realistic romantic story with a healthy dose of escapism.

Possible Pairings: Tell Me Three Things by Julie Buxbaum, The Revolution of Birdie Randolph by Brandy Colbert, I Believe in a Thing Called Love by Maurene Goo, The Fashion Committee by Susan Juby, The Museum of Heartbreak by Meg Leder, When Dimple Met Rishi by Sandhya Menon, Lucky Girl by Jamie Pacton, Bookish Boyfriends: A Date With Darcy by Tiffany Schmidt, Girl Against the Universe by Paula Stokes, Lucky in Love by Kasie West