Elaine of Ascolat could have been a lady with lovely dresses and finery. A lady who spent her days weaving like her mother in a tower room of their home on Shallot.

But that home and her mother are gone.

Instead Elaine lives with her father and brothers who fight in the Briton army under the young Arthur. The only girl in the camp, Elaine runs as wild and free as her brothers. She wishes the handsome knight Lancelot would see her as more than a child. She listens to Tristan’s sweet songs. She mends the soldiers’ clothes before each battle. She tends their wounds with herbs and poultices after.

Although she has a home in this strange world of men and fighting, although she has hundreds of brothers, Elaine longs for a real place among the men as much as she wishes for female companionship.

When another girl, Gwynivere, arrives at the camp Elaine is thrilled–until Gwynivere proves herself a cold and cruel companion.

Spurned by Gwynivere, faced with an uncertain future as war looms, Elaine decides to make her own place in Arthur’s camp and prove her worth to the soldiers–especially Lancelot. What starts as a simple plan soon turns into something more complicated and much more dangerous as Elaine has to struggle to protect everything–and everyone–she holds dear in Song of the Sparrow (2007) by Lisa Ann Sandell.

Song of the Sparrow is a revisionist retelling of the legend of King Arthur. It is also a novel written in free verse.

The Lady of Shalott, Elaine of Ascolat, has appeared in numerous retellings of Arthurian legend. Sandell has done something different here not only in giving Elaine a voice of her own but also in giving her agency in her own right. Song of the Sparrow is the story of before Arthur built Camelot–a prequel of sorts to the legends readers will know from movies and stories. Elaine is a winsome narrator with a captivating story that is as exciting and moving as it is poetic.

Beautifully written and elegantly told Song of the Sparrow is a delightfully re-imagined look at the time and world of King Arthur through a feminist lens. Highly recommended.

Possible Pairings: A Great and Terrible Beauty by Libba Bray, Revolution by Jennifer Donnelly, Scarlet by A. C. Gaughen, Ella Enchanted by Gail Carson Levine, The Outlaws of Sherwood by Robin McKinley, After the Kiss by Terra Elan McVoy, Sweet Black Waves by Kristina Perez, The Lady of Shalott by Alfred Lord Tennyson, The Guinevere Deception by Kiersten White 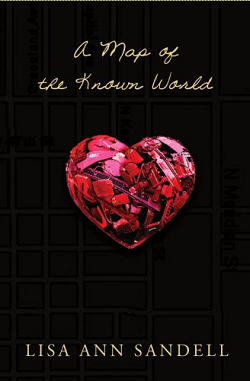 A Map of the Known World (April 2009) is Lisa Ann Sandell‘s third novel (it was also the first book I have discovered that was edited by Aimee Friedman a neat-o YA author in her own right whom I met very, very, very briefly at a reading). She has two other critically acclaimed novels under her belt. According to her website, those previous books were written in verse. I feel like saying that now because I want to address the tone of the book now, before saying anything else about it. At times the writing felt erratic–sometimes profoundly authentic, at other times very much like a writer writing as a teen. That might be due in part to Sandell’s experience with free verse. It might also be because I was reading and uncorrected advanced proof. I don’t know, but I wanted to point it out all the same. Now you know.

Cora’s life fell apart with a sudden crash. The Bradley family had been falling apart for some time, but when Cora’s older brother Nate dies in a car crash, everything is irreparably and irrevocably broken. In his wake Nate has left Cora with nothing. Her father has retreated into his private den and his daily gin and tonics. Her mother is a shadow of her former self, going through the motions of their normal life while issuing rules meant to protect Cora when, in reality, they only suffocate her.

Cora is left adrift unsure how to deal with the anger she has for her brother or anything else. Cora isn’t sure she can deal with starting high school as the girl with a dead brother. She can barely even deal with her small town and all of its constant reminders of the way things used to be:

“Somewhere, things must be beautiful and vivid. Somewhere else, life has to beautiful and vivid and rich. Not like this muted palette–a pale blue bedroom, washed out sunny sky, dull green yellow brown of the fields.  Here, I know every twist of every road, every blade of grass, every face in this town, and I am suffocating.”

Lacking any other support system, Cora finds a refuge in her art. Working from a salvaged map, Cora sketches exotic locations in far off lands–places that Cora is sure are the key to her salvation.

In addition to dealing with Nate’s death, Cora has to deal with the more mundane matter of starting high school. As her best friend throws herself into their new environment, Cora finds herself at the sidelines trying to figure out what it means to be growing up, especially when she knows her brother never can.

Cora never gets to the locations she draws in her maps, but her art does lead her to something equally important: An identity beyond Nate Bradley’s little sister. With the help of Damian Archer, the other boy in the car when Nate died, Cora also learns the truth about her brother and, perhaps, a way to fix the hole Nate left in her family after the accident.

Sandell expertly deals with Cora’s struggles to redefine herself in relation to this tragedy and her broken family. At times the writing veers toward the overwraught, but for the most part, the writing holds true. Cora is also shockingly authentic in both her grief and, I think, in her changing relationships with other characters. I often complain that teen characters are nothing like me or any of the teens I know, but Cora is. Thrown into high school without a map, Cora’s confusion over suddenly being a “real” teenager and having to find new friends will ring true with many readers.

On another note, I really liked the simplicity of the cover which evokes the art described within the novel while simultaneously alluding to the healing process after Nate’s death (the heart on the cover is made of scrap metal, I believe car parts but lacking a car cannot accurately gauge).

Possible Pairings: Speak by Laurie Halse Anderson, Love and Other Perishable Items by Laura Buzo, Can’t Look Away by Donna Cooner, Undercover by Beth Kephart, The Secrets We Keep by Trisha Leaver, Drawing the Ocean by Carolyn MacCullough, Saving Francesca by Melina Marchetta, After the Kiss by Terra Elan McVoy, I’ll Give You the Sun by Jandy Nelson, Cures for Heartbreak by Margo Rabb, Damaged by Amy Reed, The Beginning of Everything by Robyn Schneider, The Space Between Trees by Katie Williams, The Edge of Falling by Rebecca Serle, Roomies by Sara Zarr and Tara Altedbrando, Memoirs of a Teenage Amnesiac by Gabrielle Zevin