“We can trust no one. In a regime where words are watched, lies are rewarded, and silence is survival, there is no truth.” 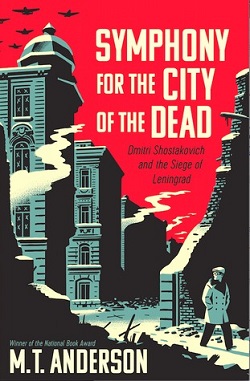 In September 1941, Hitler’s forces moved against the Soviet Union in a bid to take the country’s capital in Moscow and the historic city of Leningrad (now and previously St. Petersburg).

So began one of the longest sieges in Western history. More than a million people died over the course of the years-long siege. Amazingly, despite crippling his own military from the top down and breeding a culture of such fear that officials preferred to make ill-advised decisions rather than risk contradicting him, Stalin and the Soviet citizenry held out. Faced with starvation, blitzkrieg attacks, and the continued severity and dangers of life in Soviet Russia, the residents of Leningrad held on.

In the midst of this bleak landscape, music became an unlikely ray of hope. Varying wildly between a darling of the communist party and one of its biggest perceived heretics, Dmitri Shostakovich was a composer known around the world. With threats everywhere from both the Nazi’s and his own government, Shostakovich would write a symphony to rouse the Soviet public during their time of need.

The symphony would speak when the people feared to, it would mark all that was lost during the Communist Revolution and the Siege of Leningrad. It would give voice to sorrow and loss as well as hope and redemption. Shostakovich’s symphony would offer common ground between the unlikely allies of Britain, the United States, and the Soviet Union. This is the story of that symphony, the country that inspired it, the compose who wrote it, and the war that shaped all of them in Symphony for the City of the Dead: Dmitri Shostakovich and the Siege of Leningrad (2015) by M.T. Anderson.

Anderson offers a thoroughly researched look at a slice of WWII history that might not be familiar to many Americans. Symphony for the City of the Dead begins with the bizarre transport of Shostakovich’s symphony (via microfilm) from the Soviet Union to the United States. After that prologue the book is framed around Shostakovich’s own life from his early childhood to his death. The book touches upon the communist revolution and explores the composer’s complicated relationships with his country and the Communist Party.

Symphony for the City of the Dead includes an extensive bibliography and footnotes in the backmatter detailing Anderson’s sources throughout the novel. Strangely, for such an iconic figure, little is known as fact about Shostakovich’s life. Anderson is careful to couch his own thoughts in research and supporting documentation while also noting when the narrative veers into supposition. The book also offers a thorough and detailed accounts of the movements that led to the Siege of Leningrad ranging from Stalin’s wild incompetence and paranoia to Hitler’s Wermacht strategy.

Because of the content and the level of research involved, Symphony for the City of the Dead is a dense book. The material gains a more narrative quality after the first hundred pages but it takes a while to really dig into the material.

Anderson offers a strange mix of the bloody nightmare that was Communist Russia during the Siege of Leningrad and the optimistic hope of post-war Russia. Symphony for the City of the Dead is a fascinating example of the power of story–especially the power of art and music–as well as thoughtful look at how the truth can be shaped in the telling. A must-read for WWII history buffs and music buffs in particular. Highly recommended.