Cindy barely made it through her senior year in design school. She filled her portfolio with old shoe designs while all of the pent-up grief from her father’s death just before college finally caught up to her. Even now, as a fresh college graduate, Cindy is completely uninspired. No wonder she has no industry job prospects.

Leaving her chosen home in New York City to return to California to nanny her much-younger triplet siblings could be a much-needed chance to refocus. The plan starts to sound even better after Cindy has a meet-cute on the plane with dreamy Henry who could easily pass for Prince Charming.

Adrift and not sure how to restart her creativity, Cindy makes a surprising choice when she volunteers to appear as a contestant on her step-mother’s popular reality dating show. Sure, it’s unexpected. But it will give Cindy a chance to showcase her work and get some exposure. Plus she’ll be appearing with her other step-sisters so it’s not like Cindy will be on her own. She knows she won’t win the Suitor. But maybe she’ll land a job.

When the producers decide it would make more sense if Cindy has no connections on the show, she’s worried. When the show’s suitor turns out to be a certain charmer that Cindy got to know on a plane, she’s concerned–what are the rules for dating someone you already know while on national television?

Just when Cindy is ready to go home, she finds out that the show’s viewers have embraced her as the first plus-size contestant pushing body positivity one group date at a time. She has to stay for her new fans. As the sparks fly between her and Henry and her inspiration slowly returns, Cindy might have to stay for herself too in If the Shoe Fits (2021) by Julie Murphy.

If the Shoe Fits is Murphy’s first novel written for adults. The book is also the start of Disney’s Meant to Be series of romances which will retell different Disney classics. Being a Disney property, this novel is high on the swoons while being light on the steam.

Fans of Murphy’s previous novels will appreciate Cindy’s no-nonsense first person narration as well as her comfort in her own skin as a fat woman who isn’t afraid of being called fat. That doesn’t mean Cindy doesn’t have to confront fatphobia throughout the novel as the show’s stylists refuse to stock clothing in her size and, during one group date, Cindy is forced to cobble together an outfit out of designer clothes from a label that doesn’t make anything in her size. Rather than becoming pain points for Cindy or readers, these moments showcase Cindy’s ingenuity as a designer and underscore the book’s continued message of inclusivity.

Cindy and Henry are white. There is diversity among the show contestants, staff, and designers met along the way including one of my favorite secondary characters, Jay, who is a non-binary style icon.

While comparing If the Shoe Fits to the original Cinderella is a stretch in some respects, fans of the original will recognize key details from the original including Cinderella’s squad of helpful mice, beautiful shoes, and even a reimagining of the Disney princess’s iconic outfit. Obvious chemistry between Cindy and Henry along with their smile-inducing banter move the story along even when it gets bogged down in the conventions of the dating competition–a show that fans of The Bachelor will immediately recognize.

If the Shoe Fits is a Cinderella retelling replete with positivity in a story that centers romance and magical moments without any of the toxic feminity inherent to the original as Murphy reinterprets Cindy’s relationships with both her step-mother and her step-sisters. A must-read for Disney fans and romance readers alike.

Are you ready to go big or go home with self-proclaimed fat girl, reluctant beauty queen, and all-around icon Willowdean Dixon of Dumplin’ fame? Have you read Julie Murphy’s delightful novel about Willowdean and its companions Puddin’ and Dear Sweetpea already? Have you seen the Netflix movie? Are eagerly waiting for Pumpkin? If the answer to any of those questions is “Yes!” then look no further for some read-a-likes to keep you busy while you wait for that next installment. 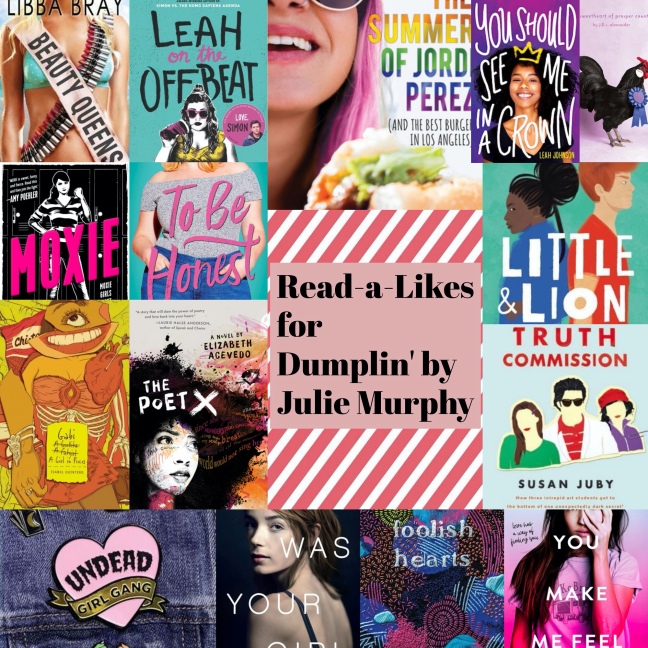 If You Want More Beauty Queens (Reluctant or Otherwise!):

If You Want A Fun Ensemble Cast:

If You Want A Sweet Romance:

If You Want More Feminist Heroines:

This piece originally appeared on the YALSA Hub blog in 2018. 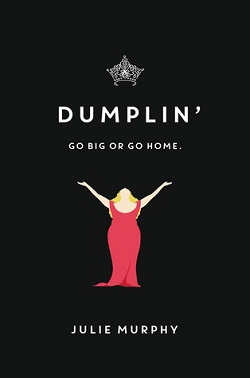 Willowdean Dickson has always been comfortable in her own skin. Even when she knows small-minded people might make unfavorable comparisons between Will and her beautiful best friend, Ellen. But Will knows who she is and she is okay with it. At least, she thinks she is until she takes a summer job working at Harpy’s–a local burger joint–alongside Private School Bo.

Bo is a former jock and totally hot. Of course Will is attracted to him. What gives her pause is that Bo seems to be attracted to her too.

When this unexpected romance makes Will question everything she thought she knew about herself (and her self-esteem), she knows it’s time to take a step back and make a change.

Inspired by all of the things her aunt let herself miss out on because of her weight, Willowdean decides to enter the Miss Clover City beauty pageant to prove to herself and everyone else (and maybe even her mother) that she can.

Entering the pageant might be the worst idea Will has ever had but with help from her friends, inspiration from Dolly Parton, and a lot of humor along the way, Willowdean will take Clover City by storm in Dumplin’ (2015) by Julie Murphy.

Dumplin’ has a very strong sense of place as Willowdean’s first person narration brings her small Texas town to life complete with its quirks and charms. And a love of Dolly Parton, of course.

Will is a charming and authentic narrator. Like many people, she has moments of doubt and often gets in her own way when it comes to being happy. She is also refreshingly self-aware and can identify these behaviors even if she can’t always stop them. While it’s hard in parts Dumplin’ to watch Willowdean being her own worst enemy, it’s also incredibly empowering to see her get it right and go after what she really wants.

Murphy’s sophomore novel highlights a lot of diverse lifestyles in this story including single parent homes, poor families, and some others that I can’t mention because they’re small spoilers.

Dumplin’ is an effervescent novel with a lot of heart and as much charm is its one-of-a-kind heroine. Recommended for readers looking for a sweet romance, thoughtful characters and an empowering story. Bonus appeal for readers who enjoy stories that feature beauty pageants.

Possible Pairings: The Sweetheart of Prosper County by Jill S. Alexander, Harley in the Sky by Akemi Dawn Bowman, Beauty Queens by Libba Bray, Love and Other Perishable Items by Laura Buzo, Revenge of the Girl with the Great Personality by Elizabeth Eulberg, You Should See Me in a Crown by Leah Johnson, The Truth Commission by Susan Juby, The Romantics by Leah Konen, How to Be Brave by E. Katherine Kottaras, In Real Life by Jessica Love, The Rites and Wrongs of Janice Wills by Joanna Pearson, If I Was Your Girl by Meredith Russo, Vibes by Amy Kathleen Ryan, Tonight the Streets Are Ours by Leila Sales, Absolutely Maybe by Lisa Yee