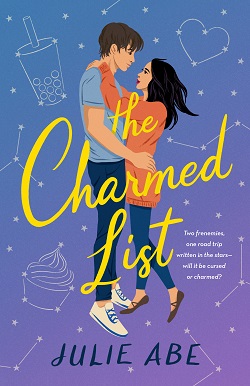 Ellie Kobata has been looking forward to her road trip with best friend Lia Park for months. Driving from Palo Alto to the California Magical Retailers’ Convention where magical merchants like Ellie’s parents can showcase their wares will be the perfect summer adventure even if traveling with non-magic-aware Lia poses some challenges. Luckily, Ellie is used to keeping magical secrets. Plus she will have Lia’s help knocking items off her Anti-Wallflower List which Ellie hopes will be able to change her quiet girl persona at school into someone more interesting to her classmates and herself.

Ellie’s high hopes for the trip are dashed when item four–getting revenge on her ex-best-friend Jack Yasuda–goes horribly wrong leaving Ellie grounded for the foreseeable future, in a fight with Lia, and worst of all driving to the convention with Jack.

With so many disasters, Ellie’s list is starting to feel like it might be cursed but as Ellie and Jack are forced to spend time together they might also have the chance to rehab their friendship and maybe even check off some other items from Ellie’s list like dancing under the stars and falling in love in The Charmed List (2022) by Julie Abe.

The Charmed List is Abe’s YA debut but you might recognize her name from her middle grade series Eva Evergreen, Semi-Magical Witch.

The Charmed List is a delightful standalone filled with romance and magic. Artist Ellie’s initially prickly narration will win readers over as she explains details of her magic-aware world including charms for things like joy or ambition and reveals more of her fraught history with Jack.

With road trip stops including quirky shops, welcoming inns, and magical cottages The Charmed List is as cozy as it is engrossing. Fans of the romance genre will recognize tropes including hate to love, there’s only one bed, and more in this story about second chances and new beginnings.

Possible Pairings: The Summer I Turned Pretty by Jenny Han, Seoulmates by Susan Lee, Spin the Dawn by Elizabeth Lim, Since You’ve Been Gone by Morgan Matson, Wild Beauty by Anna-Marie McLemore, Tonight the Streets Are Ours by Leila Sales, Dear Martin by Nic Stone, Jade Fire Gold by June CL Tan