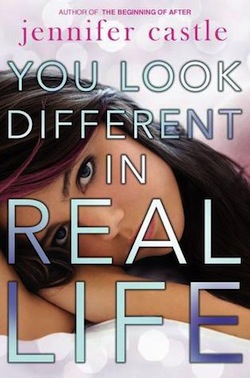 Justine is used to people recognizing her, acting like they know here even if they’re strangers. That’s what happens when your childhood is filmed as part of an award-winning documentary.

It started when Justine was six. She was filmed with four other students in her kindergarten class. Then again when she turned eleven.

Justine is sixteen now and it’s time for Lance and Leslie to come back for another film. But Justine doesn’t want anything to do with it.

She can see why Lance and Leslie picked the other kids: quirky Nate, smart Keira, outgoing Felix and Rory who did whatever she wanted. Justine never saw that same spark, that piece of interesting, in herself.

Reviewers always call Justine the star, the edgy one. They expect great things from her. But now, at sixteen, Justine feels anything but as she is forced to look not just at her unamazing life but also at the friendships that have shattered since Five at 6 and Five at 11 were filmed.

Now that a new film is coming Justine isn’t sure if she should be excited or terrified. This film might be her chance to finally prove that she is as amazing as everyone thinks and maybe even fix some friendships along the way. But it also might not fix anything. It might just confirm Justine’s suspicions that she is anything but film-worthy in You Look Different in Real Life (2013) by Jennifer Castle.

Sometimes when you read a book you go in with expectations of the story you will get. And sometimes that expected story is nothing like the story the author has written. Unfortunately that was the case with You Look Different in Real Life. I went in wanting details of the previous documentaries and the current filming. Instead I got cursory flashbacks and vague references to the crew. In the second half of the novel the documentary plot became very secondary to another character’s storyline so that the whole premise began to feel more gimmicky and less vital to the story.

You Look Different in Real Life also ends just when things should be getting interesting. Justine has a breakthrough about some aspect of the filming. But we never get to know what it actually is. By the end of the book it felt like Castle was only giving readers half the story as the documentary was forgotten (having already served its purpose as an inciting incident.)

Justine should have been a sympathetic, authentic narrator. She should have had original experiences and a unique take on things thanks to being the subject of a series of documentaries. Instead Justine came across as very one-dimensional and unbearably whiny. While she does have a clear development from beginning to end, her lack of self-esteem and confidence in the beginning was overwhelming to the point that her own self criticisms began to make me feel bad about my own life. That’s completely unacceptable.

Justine’s short-comings are lessened, slightly, thanks to the supporting cast. That is until a lot of them fell into predictable character types with equally unsurprising side stories. There are a lot of near-misses and false starts at the characters try to reconnect and, ultimately, it all just felt very forced.

If you want an okay book about a girl coming into her own and discovering her own talents and strengths, You Look Different in Real Life is a decent choice. It doesn’t have the best heroine or language (Justine moved with surprising frequency between acting/sounding much younger than sixteen and acting/sounding much older) but all of the elements are there for a quick, fairly fun read. If you want a book that focuses more on the effects of being on film or performing you’ll be better served picking up something like Take a Bow by Elizabeth Eulberg.

Possible Pairings: Keep Holding On by Susane Colasanti, Take a Bow by Elizabeth Eulberg, Fat Kid Rules the World by K. L. Going, You Don’t Know Me by David Klass, Fly on the Wall by E. Lockhart, A Map of the Known World by Lisa Ann Sandell