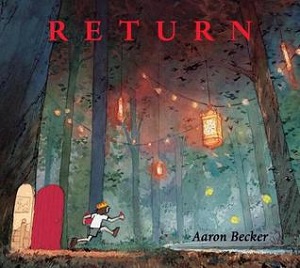 Return (2016) is the final wordless picture book in Aaron Becker‘s Journey Trilogy which began with Journey and Quest.

Return once again follows the little girl from the first two books as she returns to an amazing world where drawings come to life. This time, though, the little girl’s father (previously too busy to pay her much attention) comes along for the ride. Together father and daughter discover the surprising background of the magical world that she thought she already knew quite well.

Aaron Becker received a Caldecott Honor for his work in Journey, that same masterful artwork is used to full advantage here in this final, lush installment in a fantastic picture book series.

Finely detailed illustrations with vibrant colors draw readers into each new page with artwork that spans from edge to edge. Like many wordless picture books, Return rewards repeated readings with new elements to discover and additional pieces to pore over each time. A must-see for art and book enthusiasts alike. Highly recommended.

“When you were too small

To tell me hello,

I knew you were someone

I wanted to know.

“For all of your tininess 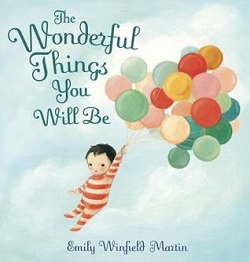 The Wonderful Things You Will Be (2015) by Emily Winfield Martin is the rare picture book that truly has something for everyone.

This thoughtful, quiet story imagines all of the things little ones (both babies and bigger kids) will grow up to be including creative and clever as well as brave and bold.

Martin’s rhyming text moves the narrative along with lyrical narration reminiscent of a poem or a lullaby. Although this book is an obvious choice for parents to read with their children, it can also work just as well in a story time program. The text is just a tad too long for a baby story time but I could see toddlers or school age children being drawn in by the bright colors and rhymes.

This picture book also add just the right touch of whimsy with subtle touches including children dressed as animals and other fantastical aspirations. Each page has ample white space for text combined with bright, colorful illustrations. The Wonderful Things You Will Be includes children from a variety of backgrounds as well as boys and girls. It also thoughtfully circumvents many gendered or cultural stereotypes to create sensitive depictions of each child.

The Wonderful Things You Will Be is a subtle, charming picture book sure to appeal to readers of all ages. A joy to read.

(Thanks to Stefani at Caught Read Handed for recommending this one to me!) 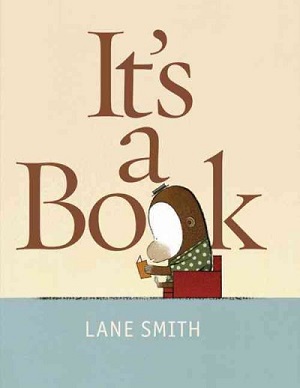 Is it wrong that I liked the book trailer for It’s a Book (2010) by Lane Smith more than I enjoyed the actual book? If it is, I don’t want to be right.

It’s a Book has a great message. In snappy text and fun illustrations, it shows all the fun a book can be. And yet . . .

There is something very meta about discussing the merits of a book in a book format. There is also the issue that anyone who really needs to know how great books are (or show their children how great they are) is not going to be reading It’s a Book in the first place. I could see this being a fun read aloud but only in a nose-thumbing kind of way among people/children who are already readers. Honestly, the trailer was more effective as a medium and I’d love to see something like it being adopted by ALA to compliment their READ posters.

There’s also the issue of the donkey. The book introduces him as a jackass and ends with a mouse reminding him, “It’s a book jackass.” And that’s fine because it’s a legitimate term for donkeys. But it’s also a language issue*** and it just feels awkward and superfluous in the story.

I’m not really sure what Smith wanted to accomplish with It’s a Book or what it actually will accomplish. It’s an interesting idea and the book trailer is wonderful in its own right(do watch it!). Oddly as an actual book this one falls short.

*I feel really strongly that what we have here is a gorilla and it’s been driving me nuts since I first saw the book that he is called a monkey throughout.

**Smith actually calls the donkey a “jackass” from the get-go, not I think in a negative way but just in a “jackass is another name for a donkey” kind of way, but I just can’t bring myself to do it.

***I’m kind of a prude when it comes to bad language, but I wouldn’t feel comfortable reading this book to anyone. Some reviews have said it’s snarky or obnoxious, I wasn’t feeling that but it was . . . a really weird element to include. 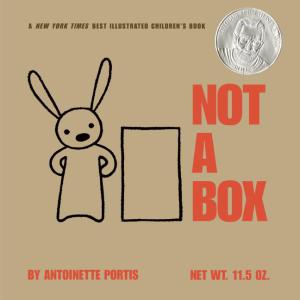 You know how young children will sometimes receive a super amazing fantastic gift and proceed to derive much more enjoyment from the cardboard box the gift came in? Well, according to Antoinette Portis‘ 2006 book Not a Box, young rabbits do that to.

There are a lot of reasons I enjoy this book, the first of which is because of its design. The book looks like a box (even though it’s not). The cover is made of brown-cardboard-feeling paper. The weight (11.5 ounces) is clearly marked on the front, while the back notes which side is up. The cardboard theme understandably continues in the book’s interior.

The structure is the same throughout, so I’m just going to go through the first one:

Brown lefthand page reading: “Why are you sitting in a box?”

Righthand page: black and white drawing of a young rabbit sitting in a box.

The same scenario is repeated several times until the clever ending.

At first I had thought that this book would be a hard sell for a read-aloud because, well, there isn’t a lot to read. However, after discussing the book with “Tori” I came to a different conclusion. Tori suggested that the book would work better in a more non-traditional storytime where the kids get in on the act. Ask the kids what they see in each picture, let them describe the story. If the children are older, you could also ask them to find the “original” box in each of the rabbits imagined scenarios.

The book would also work well in a one-on-one reading between parents and their own children, which is the scenario I had initially imagined for this book. I like the story because it’s simple with nice drawings that children can clearly interpret thanks to the thick lines and limited palette. Also, since most children do enjoy a good cardboard box, it’s likely that they’ll be intrigued by the rabbit’s scenarios and perhaps find ideas for their own playtime.

I’m not the only one that enjoyed this book. In 2007, Not a Box was selected as a Theodor Seuss Geisel  Honor Book. The award was established in 2006 for the author and illustrator who annually make “the most distinguished contribution to beginning reader books.”

The fun continues in with a piglet in Not a Stick.