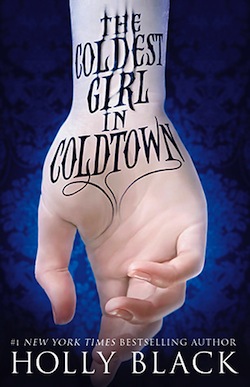 When Tana wakes up after the Sundown Party it takes her a few moments to realize everything has gone horribly wrong.

Then she sees the blood.

Then she starts passing the dead bodies.

Then she hears the vampires waiting in the dark.

The only other survivors of the massacre are Tana’s ex-boyfriend–infected and on the verge of becoming a vampire himself–and a strange boy who seems to know much more than he says.

Possibly infected and with no other options, Tana starts heading to the Coldtown in Springfield. This walled city is supposed to keep the monsters from running loose in the rest of the world. It’s supposed to contain the vampires and leave them to rule a decadent city filled with fresh blood and ruin.

Entering Coldtown is a terrible risk. But it’s also the only option Tana can think of that might actually save all three of them. With time running out and no good choices, Tana will have to embrace the monsters in Coldtown if she wants to avoid becoming one in The Coldest Girl in Coldtown (2013) by Holly Black.

The Coldest Girl in Coldtown is an unflinching story of vampires and a meditation of what it really means to fear the monsters in the shadows–especially when you might become one of those same monsters.

A slow beginning (in the first hundred pages) is easily forgiven as the story gains momentum within the walls of Coldtown. Flashbacks and vignettes from other characters help to evoke a well-realized world for both the human and vampire characters. Epigraphs at the start of each chapter from famous writers’ musings on death add a suitably eerie tone to the book.

Tana is a pragmatic, sympathetic heroine who tries to make the right choices even when she is forced to admit that sometimes there are no good choices. Her progression throughout the story is completely logical and marks her as an appealing and utterly real character complete with flaws and poorly made plans.

Black’s vampires are a terrifying blend of charm and sharp teeth in a story that understands the unique blend of terror and fascination commonly associated with vampires (or any monsters really). This story is gory, violent, and sometimes even disgusting. Yet, like the vampires themselves, it is still so delightfully compelling.