Vonceil is ecstatic when her older brother, Elber, comes home after serving on the front in the Great War. But the brother who comes back isn’t the one the Vonceil remembers. Wartime has made him serious and responsible–ready, even, to marry the girl he left behind–when Vonceil thought they’d have more time to play and get to know each other again.

Things get stranger when a sophisticated and mysterious woman arrives at their Oklahoma farm dressed all in white. She blames Elber for leaving her behind in France. She wants him to join her now.

When Elber refuses, she curses the family well and turns the entire town’s fresh water supply into saltwater.

To save her town and try to rescue her brother, Vonceil will have to travel far from everything she’s ever known into a world filled with magic, shapeshifting animals, and witches including a fickle Sugar Witch and the lady in white herself–a Salt Witch in Salt Magic (2021) by Hope Larson and Rebecca Mock.

Salt Magic is the latest standalone graphic novel from Larson and Mock. All characters are presented as white.

Vonceil’s adventure blends historical fiction set at the end of World War I with larger than life fairytale magic–a contrast that mirrors Vonceil’s own mixed feelings about getting older and growing up. Mock’s artwork is sophisticated and layered as she captures both the vast emptiness of the midwest and the lush, decadent magical world Vonceil discovers. Detailed and vibrantly colored artwork fully capitalizes on the full color page design and perfectly conveys the lush magic of the story–especially the Sugar Witch’s confections.

A well-paced plot and nuanced characters elevate this story filled with action, adventure, and magic.

Bina thought her summer was all planned out. Sure, she’s thirteen now but does that mean summer has to change?

According to her best friend Austin it does. He says says they’re too old to do the Summer Fun Index. Worse he’s going to soccer camp for an entire month.

Without Austin around Bina has a lot of free time. More than she can fill with streaming TV, her guitar, or music.

Bina finds an unlikely companion in Austin’s older sister. But in a summer where everything is changing Bina isn’t sure if she’ll be able to hold onto either of them or if it’s time to let them go in All Summer Long (2018) by Hope Larson.

All Summer Long is Larson’s latest standalone comic. It’s a perfect summery read down to the vibrant orange and yellow palette throughout the interior pages.

Bina’s summer soul searching is interspersed with a tentative new friendship, babysitting adventures, music, and her family’s growing excitement as her older brother and his husband prepare to adopt their first child.

All Summer Long is a frothy, fun graphic novel. Perfect for music lovers, musicians, and anyone who is still trying to figure everything out. 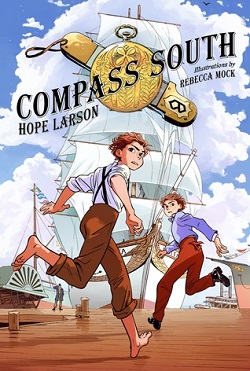 New York City, 1860: When Alexander and Cleopatra’s father disappears, the twins are soon forced into service for the Black Hook Gang to try and survive. Facing jail time after a heist goes awry, Alex and Cleo inform on the gang in exchange for tickets out of the city.

The twins hatch a plan to head to San Francisco impersonating the long-lost sons of a millionaire. But like most cons, nothing goes quite right.

When they meet Silas and Edwin, another set of twins with the same con in mind, tempers flare and trouble forms leaving Alex and Edwin shanghaied on a ship heading to San Francisco.

While Alex and Edwin try to find their way on the ship, Cleo and Silas reluctantly join forces to reunite with their brothers in Compass South (2016) by Hope Larson, illustrated by Rebecca Mock.

Compass South is the start of a projected graphic novel series.

Cleo and Alex are orphans being raised by their uncle (known to them as their father) with only two mysterious treasures–a watch and a knife–as their family legacy. The larger mystery of the knife and the watch begins to unfold as Alex and Cleo’s madcap trip to San Francisco begins.

Silas and Edwin serve as a nice contrast to Alex and Cleo with different priorities and outlooks during the course of their journeys. Larson’s nappy dialogue (in easy to read speech bubbles) works well with Mock’s carefully detailed full-color illustrations.

This story, filled with a variety of moving parts, subplots, and characters, comes together nicely in a fun introduction to the indomitable Alex and Cleo. As might be expected in a story with two different sets of twins, sometimes it’s difficult to gauge who is being shown in frame however visual clues and dialogue help to quickly clear up any confusion.

Compass South is a fast-paced graphic novel filled with action and adventure. Sure to appeal to readers of all ages looking for an exciting piece of historical fiction, and of course to comics fans. Readers will be clamoring to see what comes next for all of the characters and eager for future installments.