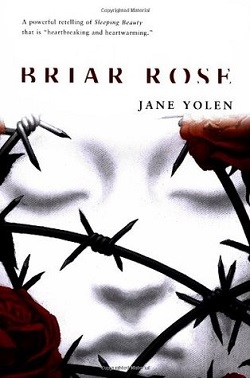 Rebecca and her sisters were always fascinated by their grandmother’s stories. Especially Sleeping Beauty. Although her sisters eventually lost interest, Rebecca never did. Years later, when Gemma is dying, Rebecca is the one who sits and listens to her tales. Rebecca is the one who hears Gemma claim that she was Briar Rose. And it is Rebecca–now a twenty-three-year-old journalist–who will follow her grandmother’s claims from their home in the US to Poland.

Yolen delivers an unlikely retelling of Sleeping Beauty in this haunting novel that blends fact with fiction. The story of Sleeping Beauty weaves together with details of the Holocaust and the brutality and horrors suffered by so many in Nazi Concentration Camps.

Originally published in 1988, parts of this novel are dated with outmoded technology and pre-Internet research. The tense and tone of Briar Rose build distance into the story as well effectively keeping readers at a remove for most of the novel. Although ultimately a story with a happy ending, Briar Rose is also imbued with sadness from the beginning even as Gemma tells her Sleeping Beauty story in flashbacks.

This isn’t a story for everyone and not a conventional retelling although elements of Sleeping Beauty do come into play with Gemma’s history as Rebecca investigates it. Recommended for readers who enjoy historical fiction or are interested in World War II. 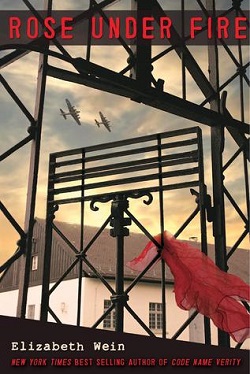 Rose Justice is a poet and a pilot. Even though she has hours and hours more flight time compared to many male pilots, Rose finds herself working as an ATA pilot transporting planes that other (men) fighter pilots will eventually use.

Rose is an American with high ideals who wants to help. The war is terrifying, much worse than she ever could have imagined back home in Pennsylvania, but doesn’t that make it even more important that Rose help however she can?

Her course changes abruptly when a routine transport goes horrible wrong and Rose is captured by Nazis and sent to Ravensbrück–a notorious women’s concentration camp.

In the camp Rose finds unimaginable horrors and obstacles but also small moments of hope through the kinship and bravery of her fellow prisoners. Even as friendships are forged amidst small moments of resistance, Rose and her friends are unsure who among them will make it out of Ravensbrück alive in Rose Under Fire (2013) by Elizabeth Wein.

Like its companion, Rose Under Fire is an epistolary novel told primarily from Rose’s journal. Snippets of famous poems (notably from Edna St. Vincent Millay) are included as well as poems Rose writes throughout her time in England and Ravensbrück.

Although this novel doesn’t have the same level of suspense as Code Name Verity it remains extremely well-plotted and poignant. And that is really all that can be said about the plot without revealing too much.

Wein once again delivers a powerhouse novel about World War II in this case shining a light onto the atrocities of the Ravensbrück concentration camp while highlighting the strength and persistence of the women who were imprisoned there.

As you might have guessed, Rose Under Fire is an incredibly hard read. The novel looks unflinchingly at the heinous “experiments” Nazi doctors committed against the Polish political prisoners known as “rabbits” from their time in Ravensbrück to the war trials in Nuremburg. While the story is important and powerful, it is not to be taken lightly and readers should be mindful of that before they pick it up.

Readers who are up to the task of a difficult read with darker subject matter will find a powerful story in Rose Under Fire with an incredibly strong and inspiring heroine at the center of its story.