Evie Jones is about to be Hollywood’s next big thing when her chance at stardom blows up in her face. After a self-imposed exile for most of the summer, Evie might have one chance to get her career back on track.

Unfortunately for Evie that plan relies on her grandmother Gigi (AKA bonafide movie star and now notorious recluse Evelyn Conaway) making her first public appearance in years. Evie is certain she can convince Gigi right until the moment Gigi disappears rather than hear Evie’s pleas.

With only days before the big appearance, Evie is running out of options to find Gigi and save her career. She reluctantly teams up with Milo–a cute musician Evie isn’t sure she can trust no matter how much Gigi seems to like him–for a madcap search across New York City.

As Evie and Milo try to follow Gigi’s trail they’ll also learn a lot about how best to blaze their own in Now That I’ve Found You (2020) by Kristina Forest.

Now That I’ve Found You is Forest’s second novel and includes a fun nod to her debut.

Forest delivers one charming ensemble cast in this story of celebrity, family, and letting people in. Positioning Conaway as Hollywood royalty and an Oscar winner for best actress in the 1970s also shifts the world in the book to give Black creators and their contributions in Hollywood the space and respect they deserve but didn’t receive in the form of Oscar recognition until decades later in real life.

Set over the course of a week this fast-paced story lets Evie and Milo shine as foils and, eventually, reluctant allies in the hunt for Gigi. Milo is a sweet contrast to cynical Evie and the ideal sidekick on their search. The story’s romance and humor set the perfect stage for Evie’s powerful arc as she learns that she is the only one who can determine her own worth.

Now That I’ve Found You is a gentle, perfectly paced romantic comedy with a protagonist learning to appreciate both her loved ones and herself. Highly recommended.

Possible Pairings: Permanent Record by Mary H. K. Choi, The Voting Booth by Brandy Colbert, Somewhere Only We Know by Maurene Goo, You Should See Me in a Crown by Leah Johnson, Tweet Cute by Emma Lord, Now a Major Motion Picture by Cori McCarthy, Lucky Caller by Emma Mills, Don’t Date Rosa Santos by Nina Moreno, The Seven Husbands of Evelyn Hugo by Taylor Jenkins Reid, Eliza and Her Monsters by Francesca Zappia

“I’ve never thought of myself as a force to be reckoned with. Maybe I should start thinking of myself that way; maybe I deserve to.”

Everyone remembers Evelyn Hugo. The old Hollywood actress is surrounded by an aura of glamour and mystery. After retiring from the public eye decades ago, Evelyn is finally ready to tell her story.

Bizarrely, Evelyn only wants to tell her story to Monique Grant–a magazine reporter still starting her career and largely unknown. No one is as surprised as Monique at the offer. But as Monique warms up to assignment she also realizes that no one is as prepared to maximize this opportunity either.

From the confines of her luxurious Upper East Side apartment Evelyn tells the story of her career from her fateful move to California in the 1950s to her abrupt retirement in the 1980s. Along the way she also reveals all the gory details about the seven husbands she married and left behind along the way.

As she learns about Evelyn’s unapologetic ambition and her stunning career, Monique quickly realizes that there has always been more to Evelyn than meets the eye. But even as Monique starts to admire the shrewd actress she realizes that Evelyn Hugo is still holding back some secrets and some surprising revelations about Monique’s own part in them in The Seven Husbands of Evelyn Hugo (2017) by Taylor Jenkins Reid.

This standalone novel is a blend of historical and contemporary fiction. The majority of the story relates Evelyn’s story as she tells it to Monique in seven parts–one for each husband, of course. In between sessions with Evelyn Monique also deals with upheaval in her own life as she comes to terms with her imminent divorce and tries to figure out next steps in her career.

The Seven Husbands of Evelyn Hugo is written in the first person as Monique receives the assignment and meets Evelyn and also with Evelyn narrating her own parts as she dictates them to Monique. Evelyn and Monique are both very nuanced characters whose stories are handled thoughtfully in this novel. That said I’m still not sure how I feel about a white author writing in the first person voice of a latina actress who was made over and passed as white for the sake of her career (something that actually happened to real life film star Rita Hayworth) or a biracial journalist like Monique.

I can’t say much more about the plot without giving something away. There are a few surprises and Jenkins Reid’s pacing is flawless as she moves from one surprise to the next. Both Evelyn and Hugo’s stories are less about romance (or marriage) and more about strong women acknowledging their own ambitions and embracing them.

The Seven Husbands of Evelyn Hugo is an engaging novel filled with old Hollywood glamour, wry commentary, and two heroines with a lot to teach their readers. Recommended.

Possible Pairings: A Touch of Stardust by Kate Alcott, The Girls in the Picture by Melanie Benjamin, Now That I’ve Found You by Kristina Forest, City of Girls by Elizabeth Gilbert, By Any Name by Cynthia Voight

The Decent Proposal by Kemper Donovan (2016)

Two strangers are approached and told that a mysterious benefactor will give them each five hundred thousand dollars at the end of the year. All they have to do is talk to each other weekly for a minimum of two hours one-on-one.

Although Elizabeth is suspicious of the offer and has little need for the money as an eight year associate at her law firm, she agrees with Richard that they have nothing to lose. Richard, for his part, certainly has everything to gain with his career floundering and his savings depleted.

Donovan’s debut novel starts with a unique premise sure to draw readers in. The title and plot are immediately intriguing. Unfortunately, the novel’s execution is underwhelming by comparison.

The Decent Proposal is set in Los Angeles–the novel works especially hard to stress the latter with copious asides and details about life in LA and its neighborhoods that add little to the plot. The characters, though diverse, are often one-dimensional with good looks that alternate between effortless and understated depending on the character.

The choice to frame Elizabeth as an uptight and somewhat repressed woman who needs a man as an impetus to show her how to loosen up and embrace spontaneity was also deeply frustrating. There is a bit of mystery surrounding how and why Elizabeth and Richard are chosen for the proposal but that isn’t enough to make up for the slight characterization throughout.

The Decent Proposal is a self-aware story with a diverse cast of characters and a fun premise. A fun story about connection ideal for readers who are more concerned with a good plot than with fully developed characters. 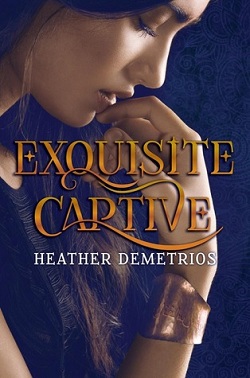 Nalia is a powerful jinni from the world of Arjinna. After a deadly coup killed almost everyone she cared about, Nalia was captured by a slave trader who sells jinn to humans. Since then she has been on the dark caravan of the jinni slave trade for three years.

Trapped in Hollywood and bound to a handsome master who is as ruthless as he is powerful, Nalia is desperate for the chance to return to Arjinna and rescue her captive brother. Unfortunately, that seems nearly impossible while bound to her master and the bottle that can hold her prisoner.

When Nalia agrees to a dangerous bargain with the leader of Arjinna’s revolution she will have to decide if any price can be too high for her freedom and the chance to save her brother in Exquisite Captive (2014) by Heather Demetrios.

This gritty urban fantasy has a lot going for it. The Hollywood setting, as well as the descriptions of Arjinna, are lush and immediately evocative. Although some of the situations are stilted, most of the story here is exciting and fast-paced.

Nalia herself is a strong and capable heroine. Unfortunately she is also in the middle of an extremely lopsided (read: forced) love triangle. On one side we have Nalia’s master Malek and on the other Raf–leader of the Arjinnan revolution. Raf often feels like a one-note character with his efforts to save his people and his strong convictions. Malek is more nuanced but decidedly less sympathetic as every bit of character development is countered with a new act of villainy. The romance, such as it is, with both men seems to come out of nowhere as feelings bloom suddenly (with varying levels of returned feelings) for all of the characters.

The well-realized world of Arjinna is sadly overshadowed by stiff descriptions and numerous explanations of djinni hierarchies and Arjinnan culture. While it is all valuable information, the sheer volume can be daunting and makes an already long story feel even lengthier.

However, Demetrios does still craft a refreshingly diverse story here (albeit with some unfortunate stereotypes creeping in–most notably with Sergei). With nods to Arabian culture and tons of action, Exquisite Captive is an interesting blend of traditional jinni lore and urban fantasy elements. It is sure to appeal to readers looking for the next big thing in paranormal romances.

Possible Pairings: Cruel Beauty by Rosamund Hodge, Finnkin of the Rock by Melina Marchetta, The Art of Wishing by Lindsay Ribar, The Winner’s Curse by Marie Rutkoski, The Amulet of Samarkand by Jonathan Stroud, Daughter of Smoke and Bone by Laini Taylor, The Fire Artist by Daisy Whitney