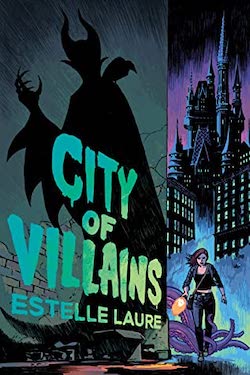 Mary Elizabeth Heart remembers when magic left Monarch City with the sudden and complete disappearance of the Scar’s newest skyscraper two years ago. It couldn’t compare to the murder of her parents and sister, but this loss is much bigger for Monarch City.

Now Mary is a high school intern with the police. Tensions are always high between the Scar’s Legacy residents with magic and the wealthy Narrows encroaching on the land for cheap real estate and not caring about the area’s magical legacy. But now a killer is taunting the police sending gift boxes of body parts.

When Mally Saint, the daughter of one of the city’s richest residents, goes missing Mary Elizabeth is as surprised as anyone to be put on the case with rookie officer Bella Loyola. As the unlikely duo delves deeper into the case, Mary Elizabeth will have to decide what to do when she discovers uncomfortable truths about the culprit, her home, and her friends in City of Villains (2021) by Estelle Laure.

City of Villains is the first book in a trilogy that re-imagines the origins of some of Disney’s most iconic villains in a fantasy noir setting. Think Veronica Mars meets CW’s Nancy Drew but make it Disney.

Laure brings a lot of dimension to familiar territory as she ages down familiar characters like The Queen of Hearts (Mary Elizabeth), Captain Hook (Mary Elizabeth’s boyfriend), Ursula (Mary Elizabeth’s best friend) and more from all areas of the Disney morality spectrum. Disney fans will enjoy hunting down all of the Easter egg references to iconic characters. Those less familiar with the Disney-verse might wonder at the one-dimensionality of some characters who feel more like caricatures when distilled down to their key traits for brief appearances in the novel.

Monarch City as a setting owes a lot to Batman’s Gotham City with its sinister shadows and political unrest. Unfortunately, Gotham City does not translate well to prose. Part of why it works in Batman is because that series is presented as comics or films—mediums with very different world building requirements than novels.

While the premise of a teen investigating a high profile case pushes the limit for plausibility, Mary Elizabeth’s persistence and grit more than make up for this shortcoming. City of Villains is a lot of potential that isn’t always allowed to fully blossom because of the marks it has to hit as a Disney property. A must-read for Disney fans and worth a look for readers who enjoy fantasy noir.

Possible Pairings: The Hazel Wood by Melissa Albert, The Brokenhearted by Amelia Kahaney, Vassa in the Night by Sarah Porter

Since I reviewed a princess-y book this week for Chick Lit Wednesday it seemed like high time to share the Disney Princess links I’ve been hoarding.

This installment of Linktastic! is brought to you by my undying love of Disney (yes even with the weird stuff they do sometimes) and my conviction that Phillip is the best Disney Prince ever. (I can’t give a definitive princess answer because while Belle has my heart, I apparently spent my toddler-hood watching Sleeping Beauty Every. Single. Day. So I’m obviously fond of Aurora as well.

Then thanks to Leila at Bookshelves of Doom I have some sad posts about everyone’s favorite archer: Merida from Brave. Merida is being inducted as Disney’s 11th princess. Which is awesome. Less awesome is her makeover for the induction ceremony where Merida has become curvier, lost her bow and arrows, and gotten a lot of makeup.

Lest you lose all faith in humanity here are some Disney links that are just for fun: