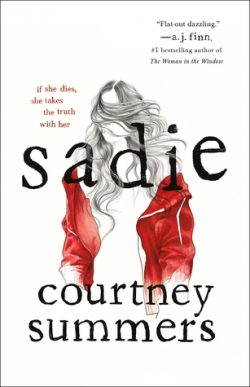 The only thing that has ever really mattered to Sadie is her little sister, Mattie. Sadie pins all of her hopes and dreams onto Mattie. She gives her the care and affection their mother can’t usually manage. Mattie is better and more and she deserves everything Sadie never thinks to want for herself.

But then Mattie is murdered.

The trail is cold and the police don’t care. After all, she’s just another dead girl.

But Sadie knows who did it. And she knows she is the only one who can make them pay–even if it means losing herself in the process.

Weeks later West McCray hears about Sadie while he’s recording a radio segment on small, forgotten towns in America. The police might not care, most of the town might not care, but West finds that he does. What starts as a podcast soon becomes a much larger project as West delves into Sadie’s past and tries to follow her trail before it’s too late in Sadie (2018) by Courtney Summers.

Sadie is a brutal story about the disasters left in the aftermath of loss and poverty. Despite the violence surrounding Mattie’s murder and Sadie’s own revenge quest, the prose never sensationalizes it. Through West, Summers makes a deliberate choice to never make Mattie into a plot point and never to appeal to the lowest common denominator by glamorizing violence.

Sadie is a calculating and singular narrator. Her shrewd narration contrasts sharply with dialog as she navigates the world with a severe stutter (a speech impediment that could have been fixed when Sadie was a child if her mother had bothered to pursue treatment). That contrast in particular highlights the way that Sadie explores poverty and privilege–particularly as West begins to unpack his own privilege in being able to initially dismiss Sadie’s disappearance as too common and not interesting enough for a podcast.

Nothing here is neat or simple–including Sadie herself. While the ending leaves readers with a lot of questions it also places the decision of how her story will unfold, back in her own hands–a freedom that was impossible to imagine at the beginning of the novel. Sadie is an incisive story about agency and feminism as well as an utterly engrossing thriller. Highly recommended.

Possible Pairings: Monday’s Not Coming by Tiffany D. Jackson, A Fierce and Subtle Poison by Samantha Mabry, The Female of the Species by Mindy McGinnis, Two Can Keep a Secret by Karen M. McManus, The Nowhere Girls by Amy Reed, Suicide Notes From Beautiful Girls by Lynn Weingarten, Girls With Sharp Sticks by Suzanne Young

In an ideal world Sloane Price would have been dead long before the world ended. Lily would not have taken her sleeping pills with her when she left Sloane behind. Then Sloane could have spun out into oblivion long before the dead started walking.

But nothing about this world is ideal. Not anymore.

Instead of being able to fade away, Sloane is caught up with six other students who have sought refuge inside the local high school. Locked inside with shelter and supplies, Sloane can’t leave without putting others at risk. She can’t die when everyone around her is working so hard to live.

The world is over. There is nothing left. Still, with everything crumbling around her, Sloane might finally learn that some things are worth holding onto in This is Not a Test (2012) by Courtney Summers.

This is Not a Test is Summers’ fourth novel. It is also her first foray into what I’m going to call “less realistic” fiction as compared to her other works. I hesitate to call this fantasy, dystopian or science fiction. Despite the ravening zombie hoards it just doesn’t fit into those genres with a story so firmly grounded on Sloane’s personal journey and so little explanation for her bleak new world. At the same time, again because of the zombies, it is equally impossible to fit this book into realistic or contemporary fiction.

Unfortunately, I wasn’t impressed with This is Not a Test as a zombie story at all. While the opening sequence is eerie and engaging, the actual zombie aspect of the book was thin on plot and explanation serving as a bleak backdrop and little else. Like many zombie stories, this novel stops short of examining what survival after the end of the world really looks like.

While some sequences were very cinematic and shockingly atmospheric, very little happens inThis is Not a Test. Summers chooses instead to focus on characters, some of whom are interesting and some of whom are simply not.* It was also frustrating to watch so many of the characters fall into the typical zombie story tropes–seen in countless other films and books–when there was so much potential to take the story in a totally new direction.**

Upon finishing This is Not a Test I was left wondering what I had really gone through with these characters.*** As a reader I seemed to be in the same place I was at the beginning by the time I finished. This is Not a Test is an interesting riff on some familiar post-apocalyptic themes. Sadly, it does not add anything new to the conversation.

*Sloane spends most of the novel dreaming about finally killing herself. Having a heroine who doesn’t want to be present in her own story is a hard sell as far as sympathetic characters go.

***SPOILER SPOILER SPOILER: After the end of the novel, when Sloane seems to finally be understanding that life might be worth living while staring at a zombie through a car window, readers see a picture of a broken pane of glass covered with what I assume is blood. So we follow these characters through hell. Sloane is finally starting to care. Then they get eaten? Why take more than three hundred pages to get to that point? SPOILER SPOILER SPOILER