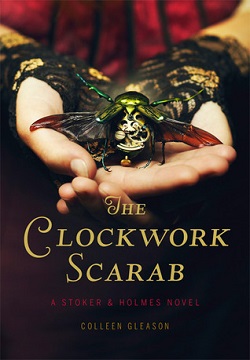 Mina Holmes is used to working alone. It’s hard enough to get anyone to take her deductive abilities seriously as a young woman in London in 1889. It’s almost impossible to get anyone to appreciate them–even if she is the daughter of Mycroft Holmes and the niece of Sherlock Holmes.

Evaline Stoker, on the other hand, is a veritable social butterfly by comparison. Much to her own chagrin Evaline finds herself spending far too much time at social gatherings when she could be using her preternatural strength and speed for their intended purposes–killing vampires.

This unlikely pair is brought together one foggy night in London with a summons to the British Museum. Soon both young women are recruited into the service of the Princess of Wales for a mission of the utmost secrecy.

Young women of quality are dying in London and it’s up to Stoker and Holmes to figure out why.

But with obstacles at every turn and odious young men underestimating their skills, both young women will have to stay sharp to solve this supernatural mystery before it’s too late in The Clockwork Scarab (2013) by Colleen Gleason.

Gleason creates an intriguing alternate London where Sherlock Holmes is real and the Stoker family is the latest in a long line of vampire hunters. In this London electricity is illegal and steampunk elements abound in this steam-powered city.

These backdrop elements, combined with a mystery based in Egyptology (the scarab on the cover is not just for show) promise a most excellent mystery novel with just a few fantastical elements to taste.

Then a time traveler shows up.

Then not just one but both heroines find themselves in painfully contrived love triangles.

And then one of the biggest mysteries of the story isn’t resolved at the end of the book. (It is clearly going to be a thread that develops in later installments, but still.)

The Clockwork Scarab has so much potential that, unfortunately, is never realized as the plot becomes mired in these extraneous plot points and devices.

Mina and Evaline are interesting heroines (though far too quick to gush over handsome young men–because all of the men in this book are handsome) though their first person narrations often sound surprisingly similar.

Short on violence and high on action, this is an ideal choice for younger readers looking for excitement without the gore. It would also be a great stepping stone for readers who want to move onto something else besides the Theodosia books or the Kane Chronicles. That said, readers looking for a purer steampunk read (or a better plotted mystery) would be better served elsewhere.

Possible Pairings: Etiquette and Espionage by Gail Carriger, The Clockwork Three by Matthew J. Kirby, Theodosia and the Serpents of Chaos by R. L. LaFevers, The Agency by Y. S. Lee, The Red Pyramid by Rick Riordan, These Vicious Masks by Tarun Shanker and Kelly Zekas, Sorcery and Cecelia by Caroline Stevemer and Patricia C. Wrede, Leviathan by Scott Westerfeld