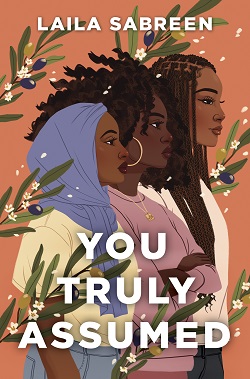 Sabriya is close enough to the attack in DC that her father picks her up from the dance studio; close enough that Bri, her younger sister, and their father all hold their breaths until Bri’s mother walks through the door. With the news cycle stuck on the attacks, on the terrorist with a name that sounds just Muslim enough for people looking for an excuse, Bri doesn’t know what to do with all of her big feelings about the attack and the aftermath and the way her perfectly planned summer of conservatory auditions is impossible now. Usually she’d write it all down in a notebook but this time she goes to a blog instead. Which changes everything.

Every Muslim in the US feels the ramifications of the attacks, worries about the Islamaphobia it will help justify. But it all feels far away for Zakat in the idyllic Muslim community she has always known in her town in Georgia. Until a childhood enemy is hired at the bookstore alongside Zakat and her best friend. While Aafreen is quick to trust and offer second chances, Zakat can’t help but wonder if this new addition to their social circle has anything to do with the vandalism at their mosque and other hateful incidents. Contributing her artwork to a new blog called You Truly Assumed should be a refuge and a distraction. But it becomes anything but as hateful commenters find the site.

Farah’s summer pushes her way out of her comfort zone. Instead of spending it with her mother, Farah is sent across the country to get to her father and meet her step-mother and half-siblings for the first time. The trip is a chance to explore college options on the east coast and test the waters of a long distance relationship. Farah doesn’t expect to also find community as a co-runner of You Truly Assumed much less as someone helping to plan a vigil after another attack.

As the blog gains momentum and attention Sabriya, Zakat, and Farah will all have to deal with the fallout as they try to make a place for themselves and other Black Muslim teens in You Truly Assumed (2022) by Laila Sabreen.

You Truly Assumed is Sabreen’s debut novel. Chapters alternate between Sabriya, Zakat, and Farah’s first person narrations. While the three start as strangers in different areas their growing connection brings both the characters and their divergent stories together. These protagonists also help break down the idea of the Muslim or Black experience as a monolith. Zakat, a hijabi, is an aspiring artist attending a Muslim school who is very active in her local mosque. Farah and her mother are Muslim but Farah is spending the summer with her Black father and his family who are Christian while she considers STEM college options on the east coast.  Sabriya comes from a inter-faith household and is weighing the pros and cons of attending college or a conservatory ballet program after high school before the blog takes off.

While the advent and maintenance of the blog is what initially starts the story, each girl has their own arc as the novel progresses with navigating new family dynamics, micro-aggressions, friendships, and romantic relationships. Sabreen balances these multiple plots and protagonists well giving each girl adequate page time to stand out. Questions of how each girl negotiates being Black or Muslim enough in spheres that try to treat the two as mutually exclusive also lead to empowering moments as each heroine comes into her own. Unfortunately the writing doesn’t always do as much work to distinguish between the narrators with the voices sometimes blending together. (I listened to the audiobook and even having three different voice actors as narrators didn’t help.)

You Truly Assumed offers an authentic perspective on what it means to navigate online spaces showcasing both the highs–as Sabriya, Zakat, and Farah form a real friendship thanks to running the blog together–and the lows–when a conservative, alt right site lists the blog for a targeted harassment campaign. The girls’ families are also refreshingly present and, as situations escalate, involved in the resolution including some hard conversations about what happens next. Although Farah is in a relationship for the entirety of the novel, the story remains firmly focused on friendship and community rather than romance.

You Truly Assumed is an empowering story about finding your voice and your community. A must read in these disconnected times.

Possible Pairings: Love, Hate, and Other Filters by Samira Ahmed, Saints and Misfits by S.K. Ali, Girls Made of Stars by Ashley Herring Blake, Love Times Infinity by Lane Clarke, Does My Body Offend You? by Mayra Cuevas and Marie Marquardt, Until We Break by Matthew Dawkins, Home is Not a Country by Safia Elhillo, The Love and Lies of Rukhsana Ali by Sabina Khan, The Hate U Give by Angie Thomas, Seton Girls by Charlene Thomas

“Like all stories, the one you’re about to read is a love story.
If it wasn’t, what would be the point?” 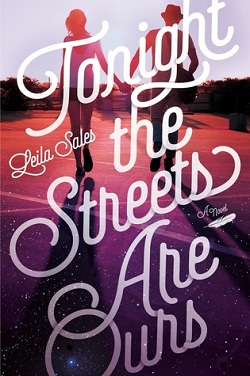 Seventeen-year-old Arden Huntley is recklessly loyal. She wants to be someone people come back for; to be someone who is not taken for granted. But that seems impossible when her best friend Lindsey is incapable of appreciating everything Arden does to keep her out of trouble and when Arden’s own mother has chosen to walk out.

Arden finds comfort and validation in an unlikely place when she comes across a blog called “Tonight the Streets Are Ours” run by Peter, a teenaged writer in New York City. Peter’s blog mirrors Arden’s own frustrations when Peter also wonders why no one loves him as much as he loves them.

Arden is fascinated by Peter’s musings and his life that seems to be filled with luxury,  adventure and, of course, a beautiful girlfriend. Until she dumps him.

When Arden reads about the breakup after her own disastrous day, she knows there is only one possible course of action: Road trip to New York City to find Peter.

During one crazy night in New York City Arden will discover that Peter isn’t exactly who he seems. And maybe Arden doesn’t have to be either in Tonight the Streets Are Ours (2015) by Leila Sales.

Tonight the Streets Are Ours is an obvious progression for Sales’ writing and it is absolutely fantastic.

The first thing readers learn about Tonight the Streets Are Ours is that it’s a love story. And that is absolutely true. However this book also subverts preconceived notions about happy endings what love stories can actually be to deliver a story that is both perfect and empowering.

Nothing and no one is quite what readers first expect in Tonight the Streets Are Ours. Everything here is muddy. Readers quickly learn that “truth” isn’t always the same as “fact,” in real life or online, as everything Arden thought she knew about Peter–and to some extent herself–is challenged again and again.

Tonight the Streets Are Ours defies expectations in this story where friendships can bend but not break, family can mean all sorts of things, and sometimes perspective is all you need to change everything.

Possible Pairings: Never, Always, Sometimes by Adi Alsaid, The Best Night of Your (Pathetic) Life by Tara Altebrando, Tell Me Three Things by Julie Buxbaum, Love and Other Perishable Items by Laura Buzo, Dash and Lily’s Book of Dares by Rachel Cohn and David Levithan, City Love by Susane Colasanti, Graffiti Moon by Cath Crowley, Reunited by Hilary Weisman Graham, Royals by Rachel Hawkins, The Romantics by Leah Konen, Tweet Cute by Emma Lord, In Real Life by Jessica Love, Saving Francesca by Melina Marchetta, Since You’ve Been Gone by Morgan Matson, Famous in a Small Town by Emma Mills, Dumplin’ by Julie Murphy, The Mystery of Hollow Places by Rebecca Podos, The Geography of You and Me by Jennifer E. Smith, The Insomniacs by Marit Weisenberg, The Sun is Also a Star by Nicola Yoon, Places No One Knows by Brenna Yovanoff, Memoirs of a Teenage Amnesiac by Gabrielle Zevin