“They called us the Mercies, or sometimes the Boneless Mercies. They said we were shadows, ghosts, and if you touched our skin, we dissolved into smoke.”

“Only fools want to be great only fools seek glory.” 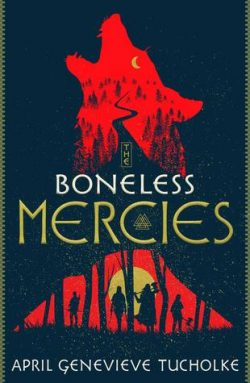 Everyone knows about the Mercies and their dark but necessary work. Frey and her band of girls travel the land. They are hired to complete mercy killings. Their work is meant to be quick and quiet. No one speaks of them with respect. No one sings of their glories.

Frey has bigger dreams for herself.

Fate comes in the form of rumors of a fierce monster in a nearby town. Killing a beast like that would guarantee fortune and, more importantly, fame. Victory will be hard won but if the girls succeed, it could change everything in The Boneless Mercies (2018) by April Genevieve Tucholke.

The Boneless Mercies is Tucholke’s gender-swapped, standalone, retelling of the epic poem Beowulf.

Tucholke’s writing is evocative with a lilting cadence that immediately brings to mind the oral tradition used to impart our oldest stories and myths. The story centers Frey and her insatiable ambition among a cast of well-realized and multi-faceted characters.

The Boneless Mercies is an evocative and feminist fantasy for fans of mythology, stories filled with ichor, and girls seeking glory.

Possible Pairings: Zenith by Lindsay Cummings and Sasha Alsberg, The Strange Maid by Tessa Gratton, The Story of Owen by E. K. Johnston, Grave Mercy by Robin LaFevers, The Bone Houses by Emily Lloyd-Jones, Seafire by Natalie C. Parker, Amber & Dusk by Lyra Selene, And I Darken by Kiersten White

“You stop fearing the Devil when you’re holding his hand.”

Violet’s grandmother, Freddie, told her to be careful of the Devil countless times. But with Freddie dead and her parents indefinitely traveling through Europe, it’s hard enough just to survive without thinking about the Devil. There are bills to pay, a twin brother to fight with and a neighbor to try and avoid.

In need of money, Violet takes a gamble and tries to rent out her family’s guesthouse. She doesn’t expect anyone to come. No one in the small town of Echo thinks much of Violet and her formerly-rich family.

Then River West drives into town all sly smiles and lazy grace to rent the guesthouse and turn the whole town upside down.

The closer Violet gets to River the more she finds herself drawn to him. But as she learns more about River and her own family’s past the more obvious it becomes that Freddie was right all along. It’s easy to lose sight of the Devil when he’s the one giving you a crooked smile like no one else in Between the Devil and the Deep Blue Sea (2013) by April Genevieve Tucholke.

Between the Devil and the Deep Blue Sea is Tucholke’s first novel. It is also the first of a duet. (The second volume Between the Spark and the Burn will be published in 2014.)

Violet is a great narrator with a cadence reminiscent of lazy days telling stories in a summer haze. Low level swear words (there are a lot of things that Violet has damn strong feelings about) and references to classic movies and books (like Casablanca and Hawthorne’s short stories) are woven seamlessly into the story to give the whole novel an otherworldly air.

This story is also strangely devoid of theology or other non-secular discussions for a book that focuses so heavily on Devil mythology and the idea of evil. In some ways that is a good thing as it makes the book approachable for a wider audience. On the other hand, even for someone who is not religious, it felt strange to see so much concern for the Devil but no mention of God except to say that there must be some kind of god if there is, in fact, some kind of devil.

Between the Devil and the Deep Blue Sea is an enjoyable book for readers who don’t mind skipping over small details that don’t quite make sense. Because it is often the little things that make this story frustrating. Where, exactly, is the town of Echo located? Why does Violet not question her strange and instant attraction to the stranger in her guest house? How many times can two teenagers realistically sleep in the same bed (naked) with nothing happening?

And, of course, the biggest question: How many chances for forgiveness does a sociopath really deserve?

Which leads to the biggest problem in Between the Devil and the Deep Blue Sea. Almost none of the characters are likable. While Violet is a sympathetic (if naive) narrator, none of the secondary characters are likable. Violet’s twin brother is a brute, her neighbor friend is vapid to the point of meanness. River, the supposed male lead, is a villain in every sense of the word: he kills people, hurts people and creates mayhem everywhere he goes not because he has no choice but because he can. Because he enjoys it.

While there is always room for anti-heroes in literature–especially ones that readers will want to root for–it is impossible to find any redeeming qualities in River. He is a sociopath. The only times he is angry or shows regret about his actions is when he is caught in the act. Otherwise it’s all in good fun. River is meant to be sympathetic but in the face of so many wrongs, that sympathy was never warranted. More to the point, River being so awful also drags down the other characters. Instead of seeing Violet and others who try to help River as steadfast or strong they only come off as enablers who are painfully, dangerously ignorant of the devil who has just come to town.

This blend of gothic horror and devilish anti-heroes will appeal to fans of Hush, Hush and Beautiful Creatures. Readers looking for a book with characters who are actually likable instead of just characters who say they are likable will be better served elsewhere.

Possible Pairings: The Coldest Girl in Coldtown by Holly Black, Compulsion by Martina Boone, How to Love by Katie Cotugno, Hush, Hush by Becca Fitzpatrick, Beautiful Creature by Kami Garcia and Margaret Stohl, Dearly, Departed by Lia Habel, Swoon by Nina Malkin, Texas Gothic by Rosemary Clement-Moore, The Beautiful and the Cursed by Page Morgan, The Dolls by Kiki Sullivan, Daughter of Smoke and Bone by Laini Taylor, Dust Girl by Sarah Zettel