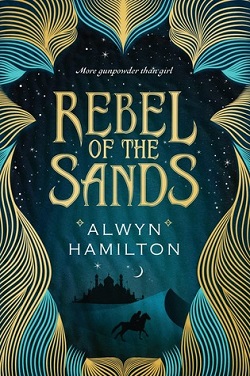 Happiness and freedom are hard things for a girl to find anywhere in Miraji–especially in Dustwalk. With her mother hanged and her father dead, there is nothing left to keep Amani tied to a town that would sooner her see her dead than independent.

After plotting her escape for months, Amani finally makes it out of Dustwalk in a flurry of gunfire accompanied by a mysterious foreigner who calls himself Jin. Desperate to get away at any cost, Amani accepts the risks of tying her interests to a man wanted for treason.

Turns out, getting out of Dustwalk was the easy part. With no one to trust and survival far from certain, Amani will have to confront hard truths about herself and her traveling companion Jin if she wants to stay alive in Rebel of the Sands (2016) by Alwyn Hamilton.

Rebel of the Sands is Hamilton’s debut novel and the start of a new series.

This book presents an interesting combination of western sensibilities (sharpshooters and horses and psuedo-cowboys, oh my!) blended with the Arabian mythology surrounding Djinn or Djinnis. With Dustwalk or the stark Miraji desert as a backdrop, this creates a setting that is at once evocative and atmospheric.

By contrast, the characters and plot fall decidedly flat. While readers are told a fair bit about Amani’s prowess with a gun as well as her spit-and-vinegar attitude, she remains one-dimensional for most of the story. Despite her first person narration, it’s difficult to identify with Amani let alone connect with her or her story in any meaningful way. The rest of the novel is filled with a cast that, while diverse, is similarly wooden often falling into obvious archetypes and tropes ranging from the power-hungry villain to the misunderstood henchman.

Being the first book in a series Rebel of the Sands also falls into the trap of providing too much setup without the story to back it up. A solid two thirds of the story does an admirable job of building the world and laying the groundwork for plot points sure to come later in the series which leads to a slow start to the story. The pacing issues are compounded by waiting until the final third of the book to introduce most of the major characters not to mention several major plot points.

Rebel of the Sands is an interesting interpretation of the western novel that deftly avoids some of the traps found in rehashing tasteless stereotypes and tropes of westward expansion. Unfortunately, a slow and predictable story do little to embellish this novel’s unique premise.

Rebel of the Sands is an interesting read for fans of westerns or fantasy novels featuring djinnis but is ultimately underwhelming as an exemplar of either sub-genre.

Possible Pairings: The Wrath and the Dawn by Renee Ahdieh, Nemesis by Anna Banks, Walk on Earth a Stranger by Rae Carson, Truthwitch by Susan Dennard, A Thousand Nights by E. K. Johnston, The Forbidden Wish by Jessica Khoury, Daughter of the Pirate King by Tricia Levenseller, Shatter Me by Tahereh Mafi, The Kiss of Deception by Mary E. Pearson, Born Wicked by Jessica Spotswood, Thirteenth Child by Patricia C. Wrede