Grace Lafferty began performing stunts as a wing walker with her uncle Warren and his barnstorming team, The Soaring Eagles, when she was thirteen years old. Her uncle didn’t know what to do with her after becoming her guardian when the rest of her family died an outbreak of Spanish Influenza. But even Uncle Warren knows better than to try and keep Grace out of the skies.

Five years later in 1922 Grace fears that the Soaring Eagles will soon be forced out of the sky by bigger teams or stricter air regulations. Determined to keep her chosen family together Grace will do whatever it takes to get to the World Aviation Expo where they can compete to win a lucrative contract with a Hollywood studio.

Throughout her preparations for the Expo Grace fights sabotage attempts from a rival barnstorming team and her growing attraction to new mechanic Henry. Haunted by nightmarish memories from the war and a limp from a battle injury Henry is stoic, professional, and infuriating to Grace who initially distrusts him. When a routine stunt goes wrong Grace wonders if she needs more than raw ambition to plan for her future in Nothing But Sky (2018) by Amy Trueblood.

Grace is an ambitious narrator and daredevil with a singular focus–often to the detriment of the team she is supposedly desperate to keep intact. Henry’s struggle with shell shock makes him one of the most developed characters but it is handled poorly being used repeatedly as a reason for the team to distrust him. The sweetness of his fledgling romance with Grace is overshadowed by these constant doubts and a general lack of nuance in Grace’s worldview.

When Henry becomes the prime suspect for the team’s sabotage it is problematic as it builds to a predictable twist when it comes to the actual culprit. Breakneck stunts and romance lend Nothing Buy Sky high action while also detracting from the rich but often under-developed historical setting.

Possible Pairings: The Game of Love and Death by Martha Brockenbrough, Every Hidden Thing by Kenneth Oppel, Black Dove, White Raven by Elizabeth Wein, In the Shadow of Blackbirds by Cat Winters

*A more condensed version of this review appeared as a review in the February 1, 2018 issue of School Library Journal*

“It’s like being in love, discovering your best friend.” 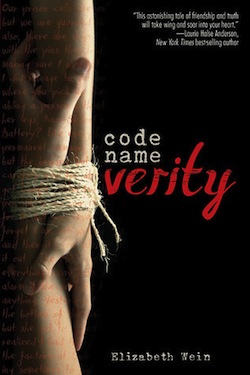 Code Name Verity (2012) by Elizabeth Wein (find it on Bookshop) is a strange book in that, I’m not sure what I can actually tell you about it without ruining everything. A plane has crashed in Nazi-occupied France. The passenger and the pilot are best friends. One girl might be able to save herself while the other never really stood a chance. Faced with an impossible situation, one of the girls begins to weave an intricate confession. Some of it might be embellished, some of it might even be false. But in the end all of it is ultimately the truth–both of her mission and a friendship that transcends all obstacles.

Broken into two parts, Code Name Verity is a masterfully written book as, time and time again, Wein takes everything readers know and turns it upside down as another dimension is added to the plot and its intricate narrative.

If a sign of excellent historical fiction is believing all of the details are presented as fact, then the sign of an excellent novel might well be wanting to re-read it immediately to see just how well all of the pieces fit together. Code Name Verity meets both of these criteria.

With wartime England and France as a backdrop, there is always a vague sense of foreboding and danger hanging over these characters. There is death and violence. There is action and danger. And yet there are also genuinely funny moments and instances of love and resistance.

Nothing in Code Name Verity is what it seems upon first reading–sometimes not even upon second reading. This book is undoubtedly a stunning work of historical fiction filled with atmospheric details of everything from airplanes to Scottish landscapes. But what really sets Code Name Verity apart is the dazzling writing and intricate plot that Wein presents. Then, beyond the plotting and the details, there are the two amazing young women at the center of a book that could have been about war or flying or even spies but ultimately became an exceptional book about true friends.

Possible Pairings: Tiger Lily by Jodi Lynn Anderson, Peter Pan by J. M. Barrie, We Rule the Night by Claire Eliza Bartlett,  A Tale of Two Cities by Charles Dickens, We Were Liars by E. Lockhart, Jellicoe Road by Melina Marchetta, Traitor by Amanda McCrina, Every Hidden Thing by Kenneth Oppel, Tamar by Mal Peet, The Shadow Society by Marie Rutkoski, All Our Yesterdays by Cristin Terrill, Paper Valentine by Brenna Yovanoff, In the Shadow of Blackbirds by Cat Winters, The Book Thief by Markus Zusak

You can also check out my exclusive interview with Elizabeth about this book!

“In each South Carolina town where I’d lived–and I’d lived in a lot of them–the trailer park was next to the airport. After one more move when I was fourteen, I made a decision. If I was doomed to live in a trailer park my whole life, I could complain about the smell of jet fuel like my mom, I could drink myself to death over the noise like everybody else who lived here, or I could learn to fly.” 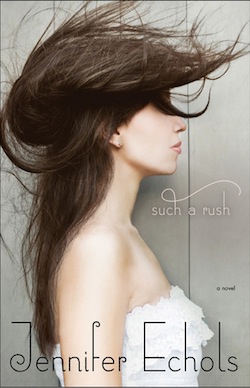 Her senior year of high school, Leah Jones things her life is finally coming together. After three years working at the local airport and flying with her instructor, Mr. Hall, Leah is finally ready for a real pilot job. She’s one step closer to her dream of becoming a professional pilot and getting out of the trailer park for good.

When Grayson threatens to expose her biggest secret–one that could jeopardize all of her future ambitions–Leah has no choice but to fly for Hall Aviation and go along with Grayson’s mysterious plot involving his brother Alec even if it could ruin everything for Leah in Such a Rush (2012) by Jennifer Echols.

Such a Rush is Echols’ first hardcover novel. She is the author of numerous romantic dramas and comedies for teens.

Such a Rush is filled with potential. The South Carolina setting is immediately evocative even when Leah is at pains to remind readers about how different both ends of her beach town really are.

Leah’s pull toward the air is palpable and adds a unique spin to the story and her character. As a heroine Leah is complicated and multi-dimensional and immediately sympathetic with an upbringing that will break your heart and, from the first line of the novel, an admirable resilience.

I’d even say Such a Rush has all of the pieces that mark a great novel.

Unfortunately, this one also has a lot of extra trappings that diminish the overall quality of the story.

While I loved the opening of the novel and admired Leah’s ambition and commitment to her goals, she is also a frustrating heroine. A lot of things happen to Leah. Throughout the course of the story Leah is exploited by  different characters forced into scenarios and situations she would otherwise avoid.

Aside from being swept up in events rather than actively seeking alternative solutions for herself, Leah’s love interest in the story is also a big problem. Leah and Grayson’s chemistry is immediately obvious. Echols writes moments between them that all but sizzle.* But their relationship is also never on an equal footing.

Sadly, Leah and Grayson’s unequal power dynamic makes their exchanges uncomfortable. Even at their most intimate–their most connected–Grayson holds his authority over Leah forcing her into directions she does not want to go.

Beyond that, it was painful to read how other characters perceive Leah. Despite supposedly being friends to her, other characters always assume the worst of Leah accusing her of everything from sleeping around to being a gold digger.** All while refusing to acknowledge everything Leah has fought against to even get to this point let alone the dedication it will take for her to actually become a professional pilot.

These problems are most apparent in the middle of the story. At the beginning Leah come across as less passive, with more agency, as readers learn what led her to the airport and Mr. Hall in the first place. The middle of the story focuses more on what everyone thinks of Leah, rather than how she is in reality, and forces Leah into a passive role in her dealings with the Hall twins. These two elements combine to make for a slow midpoint of the novel. Things come together in the end for Leah, as well they should, with a sugar sweet ending that almost makes up for the other characters’ abominable behavior during the rest of the novel. Almost.

Such a Rush is a great choice for anyone looking for an original romance even if a close reading might change your view of the characters. Issues aside, Such a Rush definitely proves that Echols is an author worth watching.

*This won’t be the popular opinion since the book is a romance novel but I think Such a Rush worked a little too hard to be steamy. The story was good enough without.

**SPOILER ALERT: Even at one of the seemingly romantic moments of the story these things come up. Right before Leah and Grayson share an intense moment on the beach, Grayson asks Leah–not for the first time–if she really didn’t sleep with Mr. Hall. In other words, the lead up to their big romantic scene is Grayson double checking that Leah didn’t sleep with his father and forcing Leah to justify the one non-dysfunctional relationship in her life. Which (because Leah keeps letting things happen to her rather than making active decisions) results in Leah telling Grayson she could have fallen for Mr. Hall had he been younger (ie: she could fall for Grayson) instead of just admitting she saw Mr. Hall as a father figure and telling Grayson to get his mind out of the gutter. Again, I want to point out this is what happens at a key romantic moment in the story. END SPOILER

Possible Pairings: Sleepless by Cyn Balog, When it Happens by Susane Colasanti, How to Love by Katie Cotugno, The Summer I Turned Pretty by Jenny Han, Clarity by Kim Harrington, Swoon by Nina Malkin, Twilight by Stephenie Meyer, Ten Things We Did (And Probably Shouldn’t Have) by Sarah Mlynowski