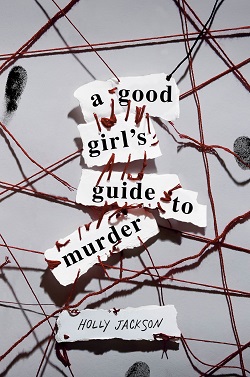 Everyone in Fairview, Connecticut knows the story of Andie Bell–the pretty, popular high school senior who was murdered by her boyfriend, Sal Singh, before he killed himself as the evidence against him mounted.

Five years later, the town is still haunted by the tragic deaths and the mystery that still surrounds the case.

Pippa Fitz-Amobi remembers Sal Singh and has never believed he could be capable of murder. Now a high school senior, Pip plans to prove it by investigating the Bell case herself for her senior project.

With access to case files, Andie’s best friends, and Sal’s younger brother Ravi, Pip has all of the pieces she needs to solve this puzzle. But as she gets closer to the truth, Pip realizes that some people don’t want the truth to be uncovered. And they’ll do whatever is necessary to stop Pip from solving this case in A Good Girl’s Guide to Murder (2020) by Holly Jackson.

A Good Girl’s Guide to Murder is Jackson’s first novel. It’s worth noting that the novel was originally published (and set) in the UK before being moved to Connecticut for the American editions although the story and characters still feel very British. Pip is white (her step-father is Nigerian and her younger brother is biracial), Sal and his family are Indian.

With suspect and witness interviews, case ephemera, and Pip’s engaging project logs between chapters, A Good Girl’s Guide to Murder is fast-paced and leaves plenty of room for readers to solve the case alongside Pip (possibly even before Pip depending on their own familiarity with mystery tropes).

Jackson subtly amps up the tension as Pip gets closer to the truth and realizes that there might be bigger consequences (and dangers) to her investigation that passing or failing her senior project. While Pip makes some bad decisions inherent to amateur investigators (always bring back up!), the story is engaging enough that Pip’s false starts are barely noticeable as the full scope of the case begins to unfold.

A Good Girl’s Guide to Murder is a fine addition to any YA mystery collection. Fans of true crime podcasts in the vein of Serial will be well served by the audio production which features a full cast recording with Bailey Carr acting as Pip.

Possible Pairings: Killing Time by Brenna Ehrlich, Truly Devious by Maureen Johnson, You’ll Be the Death of Me by Karen M. McManus, In the Hall With the Knife by Diana Peterfreund, Sadie by Courtney Summers