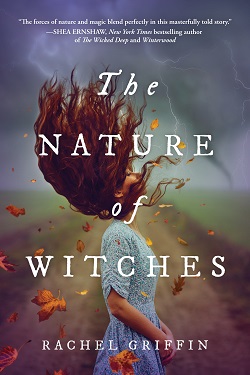 Witches maintain the weather and climate in every season. But as the weather becomes more erratic, the climate more damaged by shaders (those without magic) who take the witchs’ help for granted, it’s becoming harder for the witches to keep nature in balance. More witches are dying of depletion than ever before as they push their seasonal powers beyond their limits to try and help.

Clara could change that. As the first Everwitch born in a hundred years, she is stronger than any other witch alive. With her magic tied to every season, she should be positioned to help with out-of-season storms and other unpredictable weather phenomenon.

The problem no one is willing to acknowledge is that Clara’s magic is as dangerous as it is strong.

In Autumn, Clara is ready to do anything to deny her power. Her magic has already cost Clara her parents and her best friend. She isn’t prepared to lose anyone else.

In Winter, it’s harder to ignore how dangerous things are becoming for witches and shaders alike. Even Clara has to accept that she needs to help–no matter the risks.

In Spring, Clara falls for Sang, the spring witch helping her learn to control her powers. As Clara becomes more comfortable with her magic, falling for Sang feels inevitable even if it means making him a target for her magic. Clara already severed ties with her ex-girlfriend to protect her. She isn’t sure she can do that to Sang.

In Summer, Clare will have to decide once and for all if she can balance her happiness and her magic–and how much she’s willing to give up for either in The Nature of Witches (2021) by Rachel Griffin.

The Nature of Witches is Griffin’s debut novel. Clara is white, Sang is Korean American, and there is diversity among the supporting cast.

This novel is strongly tied to the seasons which are on full display at the Eastern School of Solar Magic in Pennsylvania where most of the story takes place. The novel is set over the course of one year with parts broken up by the seasons which trace both the changing weather and subtle changes in Clara’s personality and moods as different seasons gain dominance.

Clara’s efforts to find control and ground her magic read as an extended (and for many readers, much needed) metaphor for mindfulness and acceptance. While some narrative threads–including Clara’s reluctant status as a rare Everwitch–will feel familiar to genre readers, Clara’s path to internal acceptance will be affirming and welcome for readers living in a world that often feels as out of control as Clara’s own. The weighty beginning as Clara moves through grief for her parents and other casualties from her magic also lightens throughout the narrative as Clara fully processes her losses. The slow burn between Clara and Sang as well as Clara’s complicated history with her ex-girlfriend add another dimension to this story and cue Clara as canonically bisexual.

Griffin’s lush writing is evocative and well-informed. Griffin became a certified weather spotter for the National Weather Service while writing this novel. A magic system that is cleverly integrated into our modern world underscores the current climate crisis and need for change while offering readers a decidedly escapist story. The Nature of Witches is the perfect choice for readers looking for a magic-infused story with high stakes, characters with chemistry, and lush writing. Recommended.