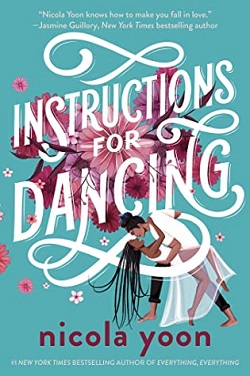 Evie Thomas is done with love.

After watching her parents’ marriage fall apart, she knows firsthand that love is a scam. Real life doesn’t have happy endings. The romance novels she used to adore are all lies.

While her mother tries to move on and her younger sister falls headfirst into every relationship she can, Evie is still angry at her father. And she’s furious that she wasted so much time believing in something that never lasts.

Giving up on love seems like the easiest course of action until Evie’s plan to donate her romance novel collection to a little free library goes horribly wrong. After accepting a mysterious book from a stranger, Evie can suddenly see people fall in love when they kiss. Her new visions trace each relationship from its tender beginning to the inevitable conclusion. It’s more than anyone can take but especially someone who is done with love.

Evie’s hunt for a way to stop whatever is happening leads her to La Brea Dance Studio and the owners’ charming, very cute nephew X. Where Evie is cautious, X is impulsive. If Evie is reserved, X is open–he always says yes. In other words, they are complete opposites and, through a series of events Evie barely understands, they are also suddenly partners in an amateur dance competition.

All Evie wants to do is stop her weird visions. If that means hanging out with X, fine. Falling for him is definitely not part of the plan, no matter how cute X might be. But the more time Evie spends with X, the more obvious it is that falling for him is as inevitable as standing close during the tango.

After witnessing so many heartbreaks firsthand, Evie knows that love always ends. As she gets closer to X, she’ll have to decide if having love at all is enough to risk the inevitable heartbreak in Instructions for Dancing (2021) by Nicola Yoon.

In many ways Instructions for Dancing feels like a natural next step (pun intended) to follow up Yoon’s blockbuster sophomore novel The Sun is Also a Star. Through Evie’s visions this story spins out from main character Evie’s first person narration to show a world that is much larger, and more beautiful, that cynical Evie is at first willing to acknowledge. Elements of fabulism (think magic realism but not by latinx authors) add unexpected magic and whimsy to this subtle story. Evie and X are Black and backed up by an inclusive cast with strong friendships and memorable adults notably including X’s grandparents.

Evie’s reluctant immersion in the world of competitive dance adds a lot of humor to a story that tackles weighty topics like love and loss with nuance and care. Evie’s friend group also plays an important role in the novel as all of them prepare for the end of high school and what that will mean for each of them and their friend web.

Possible Pairings: What to Say Next by Julie Buxbaum, But Then I Came Back by Estelle Laure, The Secret of a Heart Note by Stacey Lee, Everything All at Once by Katrina Leno, The Start of Me and You by Emery Lord, The Art of Wishing by Lindsay Ribar, The Statistical Probability of Love at First Sight by Jennifer E. Smith, The Love Curse of Melody McIntyre by Robin Talley