*In the Study With the Wrench is the second book in Peterfreund’s trilogy based on the board game Clue. Start at the beginning with In the Hall With the Knife to avoid spoilers.* 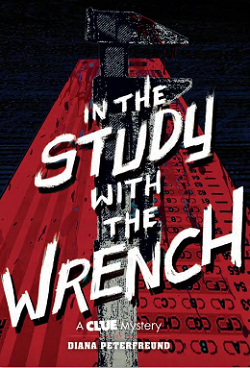 One blizzard and one murder later, Blackbrook Academy is a disaster. The campus is still in disarray with unrepaired storm damage. Students are withdrawing faster than you can say, “Did you hear about Headmaster Boddy’s murder?”

And, in the midst of the media firestorm, six students have earned an unwelcome reputation as the Murder Crew after discovering the body and helping to solve the murder.

Orchid relishes being back on campus even with the school’s tanking reputation because being there, being Orchid, means she’s safe from her past. Vaughn Green is thrilled that he and Orchid have a chance to spend more time together–but he also knows that means she’ll have more time to figure out what he’s hiding. In the wake of discovering some of Finn Plum’s secrets, Scarlett is reeling as one half of a former platonic power couple while Finn struggles to figure out how to win back her trust. Beth “Peacock” Picach is back on top of her tennis game thanks to a new life coach. Then there’s Sam “Mustard” Maestor who is still trying to make sense of his new (surprisingly dangerous) school … and his infatuation with the often deeply annoying Finn.

In a school that’s still filled with unanswered questions, maybe it’s no surprise when another dead body turns up and brings the Murder Crew to the center of another investigation in In the Study With the Wrench (2020) by Diana Peterfreund.

In the Study With the Wrench is the second book in Peterfreund’s trilogy based on the board game Clue (find it on Amazon). Start at the beginning with In the Hall With the Knife to avoid spoilers.

Like its predecessor, this novel is broken up into alternating chapters between the six main characters. Scarlet is Indian American, Mustard is Latinx, the rest of the cast is presumed white.

In the Study With the Wrench picks up shortly after the conclusion of book one as students return for a new term to find the school and its campus much changed. Peterfreund expands on plot twists revealed in the previous novel’s final chapter while delving deeper into Blackbrook Academy’s secrets in this second installment. Readers also learn more about Vaughn’s tense home life and his complicated connection to the school as well as seeing more of more of Orchid’s past.

While this information sets up a lot of interesting plot threads to be tied up in the conclusion of this fast-paced trilogy, Vaughn and Orchid are often the least interesting characters as readers quickly learn more about their respective situations than either character–or anyone else in the book–giving some later plot twists less impact. The classic game characters, reinterpreted by Peterfreund, continue to be the greatest strength of this series.

With an almost literal cliffhanger ending, more murder, and plenty of suspects, In the Study With the Wrench is another exciting installment in a mystery that is equal parts humor and suspense.

Possible Pairings: S.T.A.G.S. by M. A. Bennett, Heist Society by Ally Carter, I Killed Zoe Spanos by Kit Frick, They Wish They Were Us by Jessica Goodman, A Good Girl’s Guide to Murder by Holly Jackson, Truly Devious by Maureen Johnson, Killing November by Adriana Mather, The Cousins by Karen M. McManus, The Deceivers by Kristen Simmons, How We Fall Apart by Katie Zhao