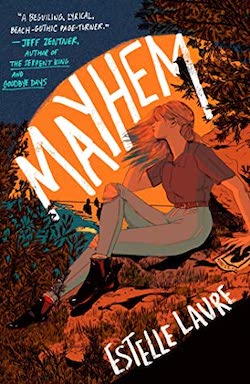 California, 1987: Mayhem Brayburn and her mother have never been like everyone else. May can see it in her mother Roxy’s constant pain, her pull to the water, the gaping hole of her father’s absence in the wake of his suicide years ago.

When her step-father goes too far, Roxy and Mayhem make their way back to the beach town–and the family history–that Roxy left behind when May was a baby. Santa Maria is everything May always hoped it would be. She meets her aunt’s foster kids, finds the family she always wanted and, amazingly, discovers her own connection to the Brayburn family’s long line of magic.

But not everything is magical in Santa Maria. Girls are going missing. Soon, Mayhem’s own efforts to find the culprit draw her into a strange world of vigilante justice and revenge as she learns more about the town–and her family’s–darker secrets in Mayhem (2020) by Estelle Laure.

If this standalone fantasy sounds a lot like the 1987 film The Lost Boys, that’s because it is. While Laure imbues Mayhem with its own magic and world building, the story stays close to the original plot of the classic vampire film complete with brief appearances by the iconic Frog brothers. Laure also brings more diversity to the cast in her update–the Brayburns are white but May’s farther was Brazilian and Jason and Kidd are biracial (Black and white).

Questions of why this story had to be set in 1987 instead of modernized are also inevitable and not well answered by any authorial choices.

How you feel about this book might depend on your familiarity with the film and your feelings about it. Mayhem includes a lot of nods to the original film but shifts in surprising ways to make space for the Brayburn’s family history as seen in a mysterious diary Mayhem finds upon exploring her new home. Unfortunately these two storylines don’t always mesh well feeling more like two separate stories than one, cohesive plot.

Mayhem is ideal for readers who like their witches fierce and their vampire references vintage.