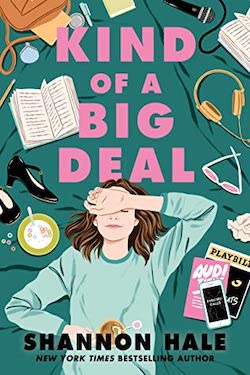 Josie Pie was a big deal in high school. She was always the lead in school productions, her teachers always said she was destined for greatness. Which is why it made so much sense when Josie dropped out of high school to be a star.

Josie keeps in touch with her best friend, her boyfriend, and her mom. But there’s only so much you can talk about without admitting massive failure (and mounting credit card debt).

When Josie and her charge find a cozy bookstore, Josie receives a pair of special glasses that transport her into her current read. Literally. In the books she can save the day in a post-apocalyptic world, fall in love in a rom-com, and more.

Living out these fantasies is the best thing that’s happened to Josie in a while. But the longer she stays inside the stories, the harder it is to remember why she should come back to her own life in Kind of a Big Deal (2020) by Shannon Hale.

Hale’s latest YA novel is a genre mashup. Framed by Josie’s contemporary coming of age story, Hale also plays with conventions in dystopian sci-fi, romantic comedies, and historical fiction (genres Hale has by and large tackled previously in her extensive backlist).

Kind of a Big Deal takes on a lot using these genre adventures to help Josie get a handle on her own life. Unfortunately, the stories within this story are often more compelling than Josie’s real life leaving Josie and her friends feeling one dimensional throughout. Stilted dialog and a premise that pushes the limits of plausibility (particularly with eighteen-year-old Josie being solely in charge of a seven-year-old girl while her mother works out of the country) further undermine this otherwise novel premise.

Kind of a Big Deal is a unique take on losing yourself in a good book. The story reads young and might have worked better for a middle grade audience or radically rewritten with older characters for an adult novel. Recommended for readers looking for plot driven genre studies.