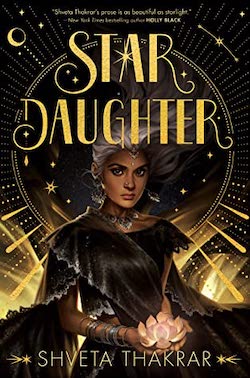 Sheetal Mistry has grown up keeping secrets. Only her father, her aunt, and her closest friend Minal know the truth: that Sheetal’s mother is a star who returned to her celestial court when Sheetal was five years old.

Since then, Sheetal has learned to keep her own celestial song buried deep where it cannot affect humans or give her away. She dyes her starlight silver hair black, she ignores the call from her family in the stars. It has never been easy to deny half of herself but her father’s love, Minal’s support, and her new boyfriend Dev have all helped.

But as her seventeenth birthday approaches, Sheetal finds it harder to ignore the way the night sky calls to her. When her father is injured by starfire, Sheetal will have to answer her star family’s summons to try and save him. But first she will have to help her celestial family secure their place as the next ruling house of the heavens.

After years of hiding and denying her true self Sheetal will have to embrace all of herself, her family, and her own complicated place with them to save her father in Star Daughter (2020) by Shveta Thakrar.

This standalone fantasy is filled with richly detailed world building bringing both Sheetal’s magical family and her earthbound Gujarati community of friends, cousins, and other family to life. Evocative, carefully drawn magic adds dimension and nuance to this story that, unfortunately, has a several lacking love interest in Dev who remains one dimensional and flat for most of the story.

Sheetal’s friendship with Minal remains much more convincing than any love match here adding a strong element of friendship and girl power to this story with a friendship that literally spans worlds.

Star Daughter is a thoughtful fantasy about friendship, growing up, and family. Recommended for readers who have always wondered what treasures can be found at the Night Market.