This piece originally appeared in the Washington Independent Review of Books: 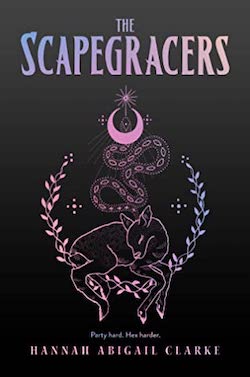 The “township of Sycamore Gorge doesn’t fuck around where Halloween is concerned” which is why October is the one time of year where Eloise “Sideways” Pike earns a modicum of respect and attention from classmates who would otherwise ignore her as the resident lesbian witch whose dads run the local antique shop.

After years of “skulking near the bottom, lurking behind the bleachers, doing magic tricks for bottles of Coke,” Sideways is suddenly and irrevocably catapulted to the top of the West High social pyramid when Jing Gao, Lila Yates, and Daisy Brink pay Sideways forty dollars to add some real magic to the start of “scare-party season.”

Sideways is almost as surprised as Jing and Yates and Daisy when the magic works. As she puts it: “Even following my spell book by the letter, the most I could do was burn paper, unbreak dishes, make scrapes and cuts scab faster. What the four of us could do was something else. I felt seasick and disgustingly in love with it, with them.”

Party magic soon leads to dead deer in a drained pool, an unknown party guest nearly assaulting Yates, devils, and trouble as the girls start to learn more about the magic they all share and what it means for their fledgling friendship in The Scapegracers (2020) by Hannah Abigail Clarke.

Sideways’s first person narration is descriptively lyrical observing the pale “bruise-lavender blue” air even as she remains extremely grounded when it comes to her own loneliness and lack of social skills. Sideways sees herself better suited to “skulking under bridges” than befriending the most popular clique in school, let alone flirting with Madeline–the stranger recruited as a fifth for their coven. Despite meddling efforts from her new friends, the course of love, much like magic, does not run smooth for Sideways.

Clarke cleverly dismantles classic popular girl tropes as Sideways and readers learn more about the triumvirate who quickly adopt Sideways into their ranks with surprising loyalty and affection. Sideways, Daisy, and Madeline are described as white, Yates is Black, and Jing is Asian—presumably Chinese. The characters are also diverse in terms of sexuality with lesbian Sideways and bisexual Jing among others.

Clarke’s debut is the start of a trilogy filled with magic, lilting prose, snappy dialog, and witches embracing their own power. Feminist themes and strong character bonds make this book an ideal companion to Kim Liggett’s The Grace Year, Hannah Capin’s Foul is Fair, and Leslye Walton’s Price Guide to the Occult. The Scapegracers is an excellent addition to the recent crop of novels highlighting sisterhood (especially unlikely ones) fueled by both feminist rage and solidarity.

Possible Pairings: Foul is Fair by Hannah Capin, Spellbook of the Lost and Found by Moïra Fowley-Doyle, Burn for Burn by Jenny Han and Siobhan Vivian, A Dark and Starless Forest by Sarah Hollowell, The Female of the Species by Mindy McGinnis, Wilder Girls by Rory Power, The Mockingbirds by Daisy Whitney, Girls With Sharp Sticks by Suzanne Young