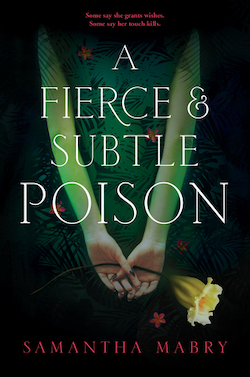 Lucas spends every summer with his hotel-developer father in Puerto Rico. The resort there, an old convent, sometimes feels more like home to Lucas than the mainland ever does.

The stories he hears there about the cursed girl with the green skin and the poison in her veins sometimes feel more real than any of the girls Lucas spends the summer romancing as a diversion. Lucas has always wanted to help her; imagined himself breaking Isabel’s curse once and for all.

This summer, when his latest girlfriend disappears and Lucas starts receiving letters from Isabel herself, his life becomes inextricably entwined with the island, the curse, and a desperate search to save another lost girl before it’s too late in A Fierce and Subtle Poison (2016) by Samantha Mabry.

A Fierce and Subtle Poison is Mabry’s debut novel. It’s easy, while reading, to see how the seeds of this story led to her subsequent novels All the Wind in the World and Tigers, Not Daughters.

Narrated by Lucas, this novel explores colonization and gentrification. Lucas witnesses firsthand the entitlement of white tourists and the damage his own father’s resorts cause to the island’s often fragile history.

Mabry expertly blends suspense and magic realism in this story of poison and disappeared girls although by the second half of the book it begins to feel like too many things are thrown into the plot as Lucas learns more about Isabel and her past.

A Fierce and Subtle Poison is a subtle story of longing and growing up. Recommended for readers who want to follow along with characters searching for their own compass–moral or otherwise.