“We weren’t supposed to owe anyone anything, but that was just a lie we told to make ourselves feel safe. Really, we’d never been safe. And we never would be.” 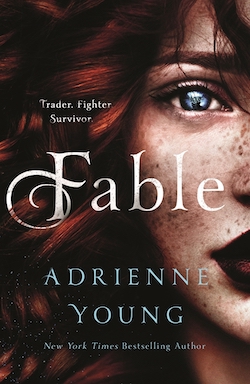 Fable’s father, Saint, has five rules for surviving in the Narrows. Only five.

The rules are even truer on Jeval, the island of thieves and cutthroats where Fable was abandoned when she was fourteen.

After four long years of constant fear and scrambling for every scrap she can scavenge, Fable is ready to escape Jeval and find her father. Saint said Fable could never survive in the Narrows if she couldn’t get off Jeval on her own. Now, with her departure so close, it is past time for Saint to answer for stranding her and give her everything he promised.

Throwing in her lot with a trade ship whose crew has secrets of their own, Fable may have finally found a way off Jeval but securing passage is only the first of her problems. As her  obligations mount, Fable will have to weigh her loyalties against her debts and decide if creating her own place in the Narrows can replace everything that has been stolen from her in Fable (2020) by Adrienne Young.

Fable is the first book in a duology that concludes in Namesake.

Young subtly weaves magical elements into the dangerous and often cruel world of the Narrows–a home that pulls at Fable’s heart as much as she wishes she could deny it. . Fable’s first person narration is both deliberate and lyrical as she struggles to make a place for herself in this world determined to shut her out. Her resilience and persistence are admirable throughout the story and so relatable for readers trying to make it through this trying year

This nautical fantasy brims over with action and suspense as Fable tries to make sense of her father’s promises, her past, and her own place among the crew that has reluctantly given her passage–especially their enigmatic helmsman, West. Fable and West are described as white while other members of the crew are not including two male characters who are romantically involved.

A subtle thread of romance runs through this plot where themes of loyalty and vulnerability go hand in hand. Fable is a riveting adventure sure to appeal to readers looking for a swashbuckling fantasy filled with both well-drawn characters and surprises. Highly recommended.

Possible Pairings: Passenger by Alexandra Bracken, The Girl of Fire and Thorns by Rae Carson, To Kill a Kingdom by Alexandra Christo, All the Stars and Teeth by Adalyn Grace, Daughter of the Pirate King by Tricia Levenseller, Isle of Blood and Stone by Makiia Lucier, Bloody Jack by L. A. Meyer, The Merciful Crow by Margaret Owen, Song of the Current by Sarah Tolcser