*The Nemesis is the final book in Kincaid’s Diabolic trilogy. This review contains spoilers for books one and two. Start at the beginning with The Diabolic* 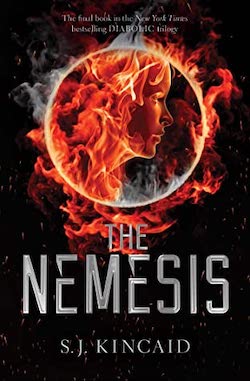 Nemesis has lived as a Diabolic bound to the young elite Sidonia. She has forged alliances and friendships as often as she has watched them crumble. She has been an empress and traveled across the space and time to earn her personhood.

But at her core Nemesis wonders if she is still merely a Diabolic–a creature whose love is possessive, ferocious, and all-consuming; a creature crafted for violence.

Three years ago Tyrus shocked the galaxy when he killed Nemesis and set himself on a path of destruction and debauchery poised to bring the entire empire to its knees.

Very few people know that Nemesis survived her would-be assassination and all of them want to use her. Blinded by rage at her own betrayal, Nemesis is determined to exact revenge against those who have wronged her.

In her hunt for vengeance, Nemesis may also find her humanity but only if she’s willing to truly look at everything that has transpired to bring her to this point in The Nemesis (2020) by S. J. Kincaid.

The Nemesis is the final book in Kincaid’s Diabolic trilogy. This review contains spoilers for books one and two. Start at the beginning with The Diabolic and The Empress.

It’s always hard to review the end of a series without revealing too much. Kincaid does an excellent job of tying things together while continuing to expand the world both as Nemesis travels through the system and as she learns more about the history of the empire.

The Nemesis covers a surprisingly long span of time given the book’s fast pacing as Nemesis works with friends and unlikely allies to try and save the empire from itself as Tyrus continues to debase both himself and the ruling elite.

The Nemesis is everything I wanted for this series conclusion. Touching on politics, social norms, and public perception versus reality, this book is truly a book of our times. The Nemesis is the perfect conclusion to a favorite series. A must read for anyone looking for a splashy space opera that will leave them picking their jaw up off the floor.

Possible Pairings: Empress of a Thousand Skies by Rhoda Belleza, The Cruel Prince by Holly Black, The Scorpion Rules by Erin Bow, The Hunger Games by Suzanne Collins, Mirage by Somaiya Daud, Incarceron by Catherine Fisher, Defy the Stars by Claudia Gray, Goddess in the Machine by Lora Beth Johnson, That Inevitable Victorian Thing by E. K. Johnston, Proxy by Alex London, Legend by Marie Lu, The Orphan Queen by Jodi Meadows, Wires and Nerve, Volume 1 by Marissa Meyer and Douglas Holgate, A Confusion of Princes by Garth Nix, Birthmarked by Caragh M.O’Brien, For Darkness Shows the Stars by Diana Peterfreund, The Winner’s Curse by Marie Rutkoski, This Savage Song by Victoria Schwab, Scythe by Neal Shusterman, Impostors by Scott Westerfeld, And I Darken by Kiersten White, Bring Me Their Hearts by Sara Wolf