*The Queen of Nothing is the second book in Black’s Folk of the Air trilogy. To avoid spoilers, start at the beginning with The Cruel Prince.*

“We have lived in our armor for so long, you and I. And now I am not sure if either of us knows how to remove it.” 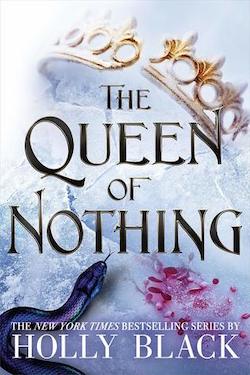 Jude has spent years learning strategy and how to survive as a mortal in the High Court of Faerie. She has spied, killed, and fought for every scrap of power. But taking power is easier than keeping it.

After trusting Cardan for one last gambit, Jude is the mortal Queen of Faerie–a title no one acknowledges and one that does her little good while exiled in the mortal world.

Betrayed and furious, Jude is keen to return to Faerie and reclaim what is hers by right, not to mention her sorely damaged dignity. The opportunity comes sooner than expected when Jude’s sister Taryn needs her identical twin’s help to survive the aftermath of her own betrayals and lies.

When Jude returns, war is brewing in Elfhame. After years teaching herself to be a warrior and a spy, Jude will now have to learn how to be a queen and embrace her humanity to save the only place that has ever felt like home in The Queen of Nothing (2020) by Holly Black.

The Queen of Nothing is the final book in Black’s Folk of the Air trilogy. To avoid spoilers, start at the beginning with The Cruel Prince.

It’s always hard to talk about the end of a series without revealing too much. Black pulls no punches in this fast-paced conclusion filled with surprising twists, unexpected reunions, and even some redemption arcs.

Jude continues to be a dynamo narrator filling the story with grim observations and shrewd strategy as she tries to keep Elhame from falling into enemy hands. After watching Jude embrace her strength and ruthlessness, it’s a powerful shift as she is forced to instead embrace her mortality and compassion to succeed this time.

The Queen of Nothing is the perfect conclusion to a favorite series. Every character gets exactly what they deserve in the best possible way. A must read for fans, of course, and a trilogy not to be missed for anyone who enjoys their fantasy with healthy doses of strategy and fairies. Highly recommend.

Possible Pairings: Legendary by Stephanie Garber, Fire and Hemlock by Diana Wynne Jones, Winterspell by Claire Legrand, The Perilous Gard by Elizabeth Marie Pope, The Diabolic by S. J. Kincaid, Spinning Silver by Naomi Novik, An Enchantment of Ravens by Margaret Rogerson, Bring Me Their Hearts by Sara Wolf, Places No One Knows by Brenna Yovanoff, Dust Girl by Sarah Zettel